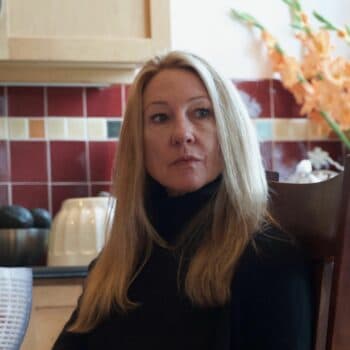 Even though our relationship has changed to a certain degree, my dad will always be the father that I know as a man of many accomplishments, from playing football at the Naval Academy, to becoming a minister, to having a long career running an analytical group in Seattle, to now continuing his life’s work as a psychologist.

By: Holly Knight
As told to: Hanna Nelson

Holly Knight is an educator, clinical psychologist, and part-time care-giver to her father Mel

The cognitive decline that comes with aging is uneven, affecting some parts of life while others areas remain untouched. My father, who has a PhD in clinical psychology, continues to work with patients he has had for many years. He reads four books a week and frequently discusses them at length over dinner.

Meanwhile, he has a tough time walking his puppy due to issues with balance, but loves to have him by his side. While he no longer likes to cook, he still loves to try new foods and he enjoys our ritual of Monday night paella dinners.

My mom, who had always handled household needs, died many years ago, and she told me to take care of my dad. Now, finding a balance in my dual roles has been one of the biggest struggles. After all, I want to be more than a caregiver to him, I want to be a daughter.

For three years, I did everything. I coordinated all of his appointments with the doctor. I helped him with medications and shopping. He has diabetes, and major kidney problems due to a medication he was on for decades. As a result, he was in the hospital five times last year. It was a constant cycle, and I had less time to devote to family and work.

As we age, we depend upon family more and more, and my father is no exception. He relies upon me to provide the support and extra help he requires to enjoy life. Here are a few lessons I can offer that may help those caring for loved ones who are aging:

Keep an open mind when you’re caregiving, but still try to have a plan and find help. It’s so hard to come up with a plan when you’re in the middle of it all. But it’s helpful to consider a long-term plan and divide the tasks among different people. Without the help of others, it’s hard to have any kind of family life.

Even though my sister lives in a different city, she now does all of the medical planning. I don’t even need to know any of the details, or think about them, but she lets me know if there’s something important to know. It has been incredibly helpful to be working as a team.

The caregiver that comes in has become wonderful support for my father. She takes care of shopping, cooking, and other household needs so that he can focus on the things that he cares about in retirement. I communicate with the caregiver daily, so I am always up to date.

People that receive support as they grow older are often left feeling as if they have lost their independence. Instead of seeing the need for support as a negative, it is important to look at it as an opportunity to focus on their time and interests. Indeed, my father will have dinner with my son and they catch up on one another’s lives. He trains his grandson and his friends in weight lifting and it makes him feel young again.

Even though our relationship has changed to a certain degree, my dad will always be the father that I know as a man of many accomplishments, from playing football at the Naval Academy, to becoming a minister, to having a long career running an analytical group in Seattle, to now continuing his life’s work as a psychologist.