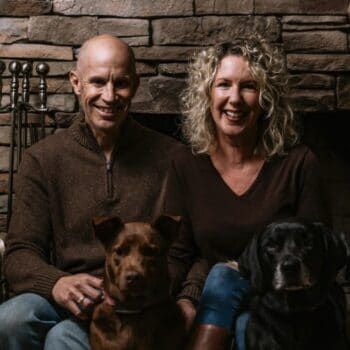 We’ve named our new friend ‘Reflection Ralph,’ Ralph for short, and sometimes Peter calls him “Raft.” Peter doesn’t know who he is or why he’s visiting, but Ralph is everywhere and in every reflection: mirrors, appliances, dark windows. Whether we’re home, in the car or out somewhere. Ralph is always with us. To immerse in this fantasy with Peter has been gut punching and heart wrenching, yet comical at times.

Lisa Marshall is a caregiver to her husband Peter, who was diagnosed with early-onset Alzheimer’s.

Lying on our bed, I sunk into the memory foam and took a deep breath, trying to rid myself of the horror as Peter showered. Eyes closed, arms overhead, I tried to relax until I had to help Peter turn off the faucet, wear his pajama pants and brush his teeth.

The shower curtain slid open, the rings screamed across the metal bar followed by the usual blather, “Where is she? Hello? I don’t have anything!” Peter’s voice continued to grow louder until he realized he was not alone. I listened intently to a new muffled conversation. Curious, I snuck a peek through the cracked door.

The conversation was real to Peter as he bantered with the new person in the mirror. When Peter saw me, he jolted and said, “We were just talking about school.”

“Ok, let’s get you dressed,” I said, not sure how to respond.

We’ve named our new friend ‘Reflection Ralph,’ Ralph for short, and sometimes Peter calls him “Raft.” Peter doesn’t know who he is or why he’s visiting, but Ralph is everywhere and in every reflection: mirrors, appliances, dark windows. Whether we’re home, in the car or out somewhere, Ralph is always with us. To immerse in this fantasy with Peter has been gut-punching and heart-wrenching, yet comical at times.

My rock, Peter Marshall, was diagnosed with early-onset Alzheimer’s on April 30, 2018, when he was just 53. Peter no longer recognizes his reflection. That memory is gone since he sees himself as twenty-something.

When Ralph first appeared, Peter would sneak into the bathroom to speak to him privately. Trying to understand this new phenomenon, I’d ask, “Who are you talking to?”

Then one day it happened. Grinning and whispering and tiptoeing quietly and motioning wildly for me to follow, Peter summoned me to the bathroom for the formal introduction.

Blood rushed up through my face and I tried to remain calm. Peter was watching my every expression for confirmation. I gulped a deep breath, and drew a magic marker smile with my biggest, fattest sharpie.

Eyebrows raised, I nodded my head and assured him, “It’s you!” But that’s not at all what I was supposed to say. We never, never, never, argue with the demented person: Alzheimer’s 101, ya dumb dumb. Immediately I back pedaled and told Ralph how nice it was to meet him. Peter was perplexed as Ralph wouldn’t answer. I suggested that perhaps Ralph was shy and just needed some time. Peter agreed.

Ever since, Ralph is met with Peter’s delight each time he visits. Peter does not recognize his image in photos or videos or a just-taken selfie. Ralph keeps Peter busy and provides comfort. My heart aches when I witness this behavior and other times, I’m thankful. This unlikely pair has the best times together!

One evening Peter had gone upstairs and was absent longer than I liked and so, I tiptoed to see what he was doing. As I approached our bathroom, I heard loud giggling. I snuck quietly around the corner and slowly moved my head so I could just barely see what Peter was laughing at without being caught.

There he was, in front of the big bathroom mirror doubled over belly laughing, a grin sewn on ear to ear, and the water running furiously from the faucet. Peter was taking hands full of water and throwing them at Ralph. The mirror and sink were soaking wet and I slowly rolled around out of view not knowing whether I should laugh or cry.

Anxiety and fear cloak Peter often and we have learned coping skills to quiet his mind or perhaps just momentarily distract it. Months ago, I constructed a basket of things, memories for Peter to find and rifle through at his leisure. It’s a marvelous way of finding forgotten treasures.

One day, Peter was searching for a golf ball in the basket of things. He spent almost three hours wondering, searching, looking, fiddling, and questioning. One of the items is a small photo album I made for him 10 or maybe 12 years ago. It contains photos of our adventures and words that express something I love about Peter.

He settled for a long while on a picture of us on our wedding day. In the photo, Peter cradled me high in his arms on a beach in Turks and Caicos. The day was a glorious memory for me but new for Peter. He brought it to me, and I told him about our day in as much detail as he could handle, and he wept. And then he wept some more.

We held each other so tightly and Peter said, “This sucks,” in a moment of clarity as if he understood what was happening, knowing he couldn’t stop it or help or change anything.

Peter disappeared and after worrying for some time, I went to look for him and found him in the bathroom, once again talking to Reflection Ralph in the mirror. He was sharing that wedding photo with his friend. Tears were streaming down his cheeks as he held the photo up to his reflection, talking through his tears about our magnificent day.

I didn’t care about what was right or wrong and about how to properly handle the situation. I just ran to him as my heart bursted with so much pride and grief and love. I fell into his arms and melted into his chest, sobbing out loud with my shoulders shaking.

Peter cried with me, holding me so tightly, promising me then as he rubbed my back, “Everything will be okay.”

See all Voices
Copyright © 2021 Being Patient
Ping blog
We use cookies on our website to give you the most relevant experience by remembering your preferences and repeat visits. By clicking “Accept”, you consent to the use of ALL the cookies.
Cookie settingsACCEPT
Manage consent