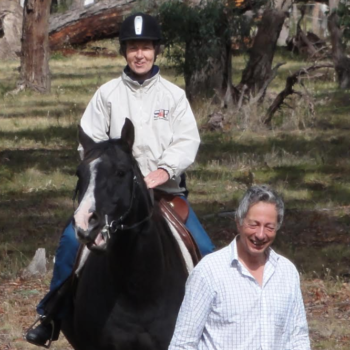 To state the blindingly obvious, the carers know the patients best. The carer has the experience of the patient which allows continuous observation and the discernment of trends. The carer knows what subjects get the patient’s attention, what activities can provide a distraction in times of stress and what foods are preferred when appetite wanes.

I was the principal caregiver for my wife, Carole. I retired earlier than planned because Carole needed more help at home. Her sister and brother-in-law, a nurse and a doctor, noticed symptoms which they likened to Alzheimer’s disease. We started investigating intensively. It took over a year before, in 2011, we discovered she was living with frontotemporal dementia (FTD). Initially, Carole’s symptoms were anxiety, discontent and some trouble finding words. After I spent more time with her, I soon learned there were tasks that she could no longer do. She had been a fast typist, but that had slipped away. FTD is a degenerative disease in which cognition, speech and eventually mobility decline progressively as a result of the brain shrinking. It is a fatal disease with no cure. This year, Carole passed away after being diagnosed nearly nineteen years ago.

At the time of diagnosis, Carole could still drive. She treasured her independence. I eventually took over all the night driving, navigation, cooking and progressively, more of the household chores. We made many trips to visit friends and family. We lived alone on a farm two hours from Melbourne. For the first couple of years, we managed fine by ourselves. With the progression of Carole’s symptoms, she lost her driver’s license. This was traumatic for her as she had always been a good and accomplished driver, and she valued the license as a recognition of her competence and worth.

Her anxiety heightened and she was given medications. She went through a kind of rage stage with many events and tears. She lost more language expression and comprehension and developed some obsessions about money and items she feared were lost. I researched communication strategies, medication developments and became her advocate for pension and health entitlements.

I felt like an inadequate caregiver. Carole and I were parents to some fine adult citizens, so the tasks of caring were familiar, but it was a daunting prospect to face this tough journey alone. I often remarked that “I was born without my fair share of the Mother Teresa gene.” I had thoughts of “Why me?” I tried to communicate logically, but impaired logic was one of Carole’s newly-acquired principal disabilities.

Initially, I felt very alone. My internet research told me that this diagnosis was fatal, but the rate of progression was highly variable and the symptoms each patient exhibits depend on which parts of the brain are first attacked. I could find plenty of information about the pathology but very little about coping and caring strategies.

I became a better carer once I made the leap to “Why not me?”

Carole’s disease tipped our whole lives upside down. We had chosen to live in the country because we expected to remain in good health. Now, we were isolated from family, from health services, from respite facilities. Clearly, we were heading for trouble and needed to sell the farm and horses.

After I had to give up work and cut short an employment contract in work I treasured, our superannuation and retirement plans were not mature, so we had to tighten our belts.

Initially, I could leave Carole at home alone for a couple of hours if I had farm work, horse care, fencing or maintenance to do. After a couple of years, she needed company and supervision all the time.

I was fit, strong and felt able, physically and mentally, to do whatever was necessary, including cope with the unknowns. But I was hopelessly unprepared emotionally and I felt starved for advice. I could not understand how there could be tens of thousands of patients with dementia, but a total dearth of strategies for coping, advice and support.

The local Home and Community Care (HACC) services were sincere and supportive, but unprepared for the challenges of dementia. Another carer alerted me to Aged Care Assessment Team (ACAT) services. I self-nominated and Carole was assessed as level 4 dependency, eligible for the highest class of support and respite.

At a time of high anxiety, Carole’s helpful general practitioner suggested I search online for a dementia carer support group. That became my “forum family.” Nobody knows the issues, the challenges, the whole journey as well as other carers ahead of you on the road. Through that bulletin board, I learned also of the life’s work of my favorite hospice nurse, Barbara Karnes RN, who advises families on how to cope with the later stages of life. I also encountered the inspiring diary of a widower who described his grieving, coping and legacy.

Our children were fabulous. When my health cracked, they left their businesses and full-time jobs and traveled to pitch in and help us through the crisis.

There are some truly global issues when it comes to support services that are missing for carers. The first and biggest is that carers find themselves isolated in many ways. Spouses tend to become sole carers. It is the nature of the disease that symptoms are initially intermittent, and become apparent only with 24/7 observation and a knowledge of changes and trends. Other family members would often say “she seems fine to me,” and turn their backs on a caring involvement. The patient’s behaviors and failing manners make it difficult to dine out and maintain normal social activities. Typically, only a few close friends can understand and hang on.

The diagnosis of dementia is problematic, time-consuming and error-prone. A definitive diagnosis is only possible post-mortem. So the testing of symptoms is indirect and unreliable, resulting in many delays and many incorrect diagnoses.

The practitioners administering tests are specialists with typically no knowledge of the patient, seeking an insight into behaviors in a clinical setting very unlike the patient’s familiar home environment. We were very fortunate that Carole’s symptoms were classic and distinct and were quickly identified by a young neurologist trained in diagnosing dementia. Many other patients are misdiagnosed, wrongly treated and greatly stressed. Practitioners are aware of the problems and are working quickly and well to improve education, training and diagnostic algorithms.

Not all carers encounter great emotional issues with the ending of a driving license, but those patients who dispute this loss find the procedures and outcomes very troubling. Patients are required to undergo annual tests, verbal and practical, similar to those administered to learner drivers. It is, of course, incongruous to use oral tests for a person whose disability is semantic communication.

There are better tests available (and they are used, for example, for deaf people) and they cost no more and take no longer. The present system generally produces reasonable outcomes, thanks to the experience and discretion of the people involved. But its antiquated, bureaucratic and flawed processes leave it open to valid criticism and complaint. Carers are the available target, and typically suffer the stress and criticism.

The law in Australia is hard on carers. Wills and powers of attorney need to be put in place before a diagnosis is reached. But nobody advises carers of the timing issues.

Following a diagnosis of dementia, the patient’s mental capacity comes under a legal thundercloud. Any will or power of attorney made subsequently may be challenged and potentially overturned on the ground the patient lacked the capacity to make proper decisions. Yet, post-diagnosis, if a carer says the patient is incapable of driving safely, the patient’s rights including privacy come first and there are cases in which the patient has been allowed to continue to drive unrestricted. Yes, they are simultaneously unfit to decide bequests for their own assets, but they are allowed to take charge of a lethal weapon on public roads.

The Practice Notes issued by Australian health authorities to doctors are outdated. Doctors rely on the Practice Notes for protection in the event they are sued for malpractice. But the Australian Practice Notes continue to recommend medications which are strongly discouraged in World’s Best Practice. Examples include haloperidol (Haldol) and benzodiazepines such as diazepam (Valium), which are strongly discouraged by U.S. national authorities for patients with FTD. We found the use of these medications to be poison for someone with this condition.

The first role of palliative care I encountered was the education of carers in the processes in the latter stages of life. At that time, I had little first-hand experience. I had never participated in the care of someone dying slowly by illness. There was a great deal to learn.

As Carole became totally mute, doubly incontinent, could not stand or walk and struggled to swallow food and drink, she was placed in residential palliative care in a dementia-specific ward. I continued to feed Carole her lunch, take her outdoors for fresh air and sun and advocated for her needs. When I was not there, Carole’s care was provided by professional palliative care staff.

I found it very difficult to find the appropriate resources for palliative care. Much of the information I was given proved wrong. After a disastrously inappropriate placement with an unsuitable residential facility, I knocked on every door until I learned enough to ask the right questions and find the right people. I felt I was very poorly served by the people who were supposed to advise and guide me as a carer.

I have found the palliative care community understands carers better than most medical disciplines.

To state the blindingly obvious, the carers know the patients best. The carer has the experience of the patient which allows continuous observation and the discernment of trends. The carer knows what subjects get the patient’s attention, what activities can provide a distraction in times of stress and what foods are preferred when appetite wanes. Carers can provide helpful “patient notes” which palliative care staff find valuable.

The weakness of carers is an emotional involvement, an empathy, which can warp good judgement.