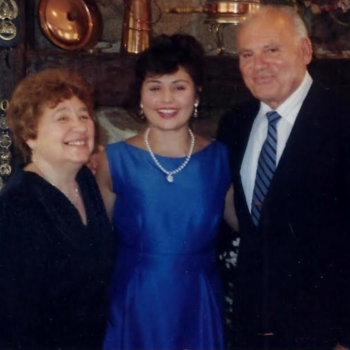 There are a lot of children visiting people in those nursing homes. It breaks my heart that my six year old did not get to know her grandmother and lost her grandfather to Lewy body dementia (LBD).

My mom was an expert tailor who specialized in men’s clothing and ran a tailoring business in Italy. Later, my parents immigrated to the United States from Italy and arrived together in 1961. My mom continued to sew for our family in the U.S. However, we noticed her sewing suddenly started to look strange. She sewed a shirt that someone couldn’t wear; the sleeves were wrong, but she insisted that the shirt was fine. My dad and I knew something wasn’t right. I think a telltale sign that your loved one may have Alzheimer’s is when they eventually stop excelling at something they once could do with ease and expertise.

While my mom started showing symptoms of Alzheimer’s in the late 90s when she was in her 60s, getting her diagnosed was a long process. First, a doctor asked her questions. Afterward, she had to get a full neurological assessment. After they ruled out other diagnoses, they did an MRI on her brain and she was diagnosed with Alzheimer’s in 2000 when she was 72 years old. The process took over six months because we had to go from one specialist and test to another. Back then, there was almost no information about Alzheimer’s. I had heard of Alzheimer’s, but I considered it an old-age disease. I had no idea it was a disease with no cure for someone in their 60s. We were stunned when we asked the doctors, “What should we do?” and they said, “There’s no cure. We can put her on medication, but a lot of it doesn’t work.” I thought, “Are you kidding me?”

After my mom’s diagnosis, I set up my parents’ house like a nursing home. I signed her up for hospice. I was lucky because the nurse that came to see my mom was someone I went to high school with and she came in regularly. Because my mom was on Medicare, she was also provided with a hospital bed, feeding tube and other equipment. She required 24-hour care, so she also had home health aides. I created a sheet that aides coming into the house had to fill out. On the sheet, they had to mark off when she had a bowel movement, when she ate and when her insulin was last checked, since she was diabetic. This way, they could see what still needed to be done.

A few years after her diagnosis, Mom had a dramatic weight loss, wasn’t able to walk and became bedridden. Then, she ended up hospitalized after getting an infection and a high fever. She was placed in a nursing home after the hospital stay. However, I was unhappy with the care, so we brought her home again for a few years. The care eventually became a lot on my dad, so she had to go back to a nursing home. She wanted to be buried in Italy, so we selected a nursing home there, where she passed away in 2008 after having Alzheimer’s for nine years.

Shortly after she passed away, I participated in the Walk to End Alzheimer’s, which helped me with my mourning process and started my journey working with the Alzheimer’s Association. While I was preparing for the walk in the summer of 2015, my dad, who was in his 90s, developed Lewy body dementia (LBD). Although he was older, he was very healthy and looked like someone who was 70 years old. He went to Italy every year, and whenever he stepped off the plane, he looked like a movie star: tan and healthy. The doctors all looked at us like, “He’s 90 years old, what do you expect?” but his primary care doctor was just as shocked at his diagnosis as we were. Doctors think he may have had a stroke, but they couldn’t do an MRI on him because he was a WWII veteran and had shrapnel in his body. He was initially diagnosed with Parkinson’s. The doctors put him on a lot of medication, but the medication made him aggressive.

My dad began experiencing a lot of falls, so we looked for a nursing home. While researching nursing homes, one of the directors for the Alzheimer’s walk came over and suggested my dad may have LBD. The doctors initially rejected this diagnosis. He kept getting sent back to the hospital for falls. By the third time he was sent back, I exploded and said, “They keep sending him here, and you keep sending him back. There’s something wrong. Does he have LBD?” One of the characteristic signs of LBD is balance and vision troubles, which can lead to falls. After eight days of testing, they determined he had LBD. He was taken off the Parkinson medication because it can be dangerous for someone with LBD. Misdiagnosis of Parkinson’s is common in older people, I learned.

When my dad moved to the long-term care unit, I saw that the staff understood his condition in a way the short-term care staff was not trained to. The staff treated him with love, he became happy and developed friendships there. My dad was a remarkable person who always tried to look on the bright side, even when the situation was not ideal.

After you place your loved one in a nursing home, you should visit frequently if you can. Change the time of day you visit the nursing home. Keep the staff wondering when you’re going to show up. Also, treat the staff how you’d want to be treated. I often brought them cookies and plants. Even if you’re frustrated, you shouldn’t take it out on them.

When visiting a nursing home, make your presence known by talking to the nurses and getting updates on medication. I took him off a lot of his medications because I didn’t think he needed them. When we reduced his medications, he did a lot better; he was more lucid, could walk better and smiled more. He became himself again. Do your research and understand if your loved one really needs all the medications they’re prescribed.

I’d also bring my daughter into the nursing home and she would talk to the staff while she was there. My daughter visited my dad every week. There are a lot of children visiting people in those nursing homes. It breaks my heart that my six year old did not get to know her grandmother and lost her grandfather to LBD. However, working with causes that support dementia has helped me work through some of my grief.

Giovanna Sgarlata LoSardo was a caregiver for her mother and father. She lost her father to Lewy body dementia and her mother to Alzheimer’s. She is the social media chair and former co-chair of the committee for the Fairfield County Walk to End Alzheimer’s, a founding member of the Women’s Champions, part of the Alzheimer’s Association’s Connecticut Chapter and founded the Facebook group Fairfield County Alzheimer’s Community Chat Page.