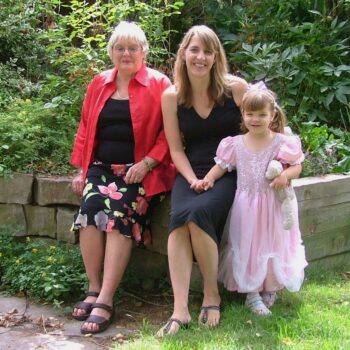 I grew up in a household where my mom sang “Jesus Christ Superstar,” “The Sound of Music” or “My Fair Lady” songs from end to end; she loved musicals. After she was diagnosed, we tried to incorporate musicals into her life as much as possible. We watched musical movies with her a lot. Having music around can also be comforting to caregivers. Mom always sang so loud and proud, and we had a lot of special moments seeing concerts and musicals together. Music was a lifesaver.

The beginning signs of Alzheimer’s in my mother were subtle, but noticeable to those close to her. My mom ran a bed and breakfast and was really social, but suddenly, she became more introverted. My sister lived in New York City and I lived near my mom in Toronto. I remember my sister asking, “What’s going on with Mom? She’s been so quiet.” We initially assumed it was because she moved into a smaller community. But then she also started getting lost in familiar places. My mom was diagnosed with dementia in 2005 when she was 62 years old, but we confirmed that she had frontotemporal dementia after she passed away. After her diagnosis, music played a big role in our journey with dementia and offered my mom a lot of relief and joy. It led to many wonderful moments where my mom sang and danced with my kids. Music brought out the social side of my mom that we all knew and helped her connect with my kids.

I grew up in a household where my mom sang “Jesus Christ Superstar,” “The Sound of Music” or “My Fair Lady” songs from end to end; she loved musicals. After she was diagnosed, we tried to incorporate musicals into her life as much as possible. We watched musical movies with her a lot. She especially liked Johnny Cash movies. It’s great that today, any musical you want to watch is at your fingertips. Ten years ago, it wasn’t that easy. When my mom was a little stressed, we put on “The Sound of Music.” Within minutes, she started singing and became less stressed.

We also took my mom to various theater productions in her small town. Sometimes, we didn’t tell her where we were going because she might become stressed, but once we took her into the theater, she became excited and would ask, “Oh, are we going to see something?” She sang very loudly, but it was a lot of fun. My mom was proud that she knew all the songs. Little kids don’t mind people singing, so she and my children got to share these experiences together.

My children were young when my mom was diagnosed—my son was actually born the year of her diagnosis. When you have young kids, you have a lot of toys that play songs like “Twinkle, Twinkle Little Star” and other familiar nursery rhymes. My mom knew all of the songs and my kids started to learn that if you played any of this music, Nana would sing. They enjoyed doing this with her. She’d always say, “I know this one!” Christmas music was like that too. Sometimes, we’d play Christmas music when it wasn’t even Christmas because people typically sing these songs more than others, so Mom remembered them all. My kids connected with my mom because she was more spontaneous and fun than other adults. In the summer, they’d say, “Let’s play ‘Rudolph!’” and she’d sing along with them. Even when Mom lost her ability to speak, she still sang.

We also began taking what my daughter called “car rides to nowhere.” Sometimes, if Mom seemed really stressed and kept going to the front door, I’d say, “Let’s go in the car. We’re going to go to the park.” Once we got in the car, we began playing one of Mom’s favorite soundtracks from a musical, turned it up and drove for 15-20 minutes. Mom started singing and my kids were in the backseat having a good time. We never went to the park because we were all having a lot of fun and Mom was so much more relaxed within the first five minutes of being in the car.

Using music to connect with a loved one who has dementia also helps you notice things you might not have previously thought about. For example, one time, we were grocery shopping with my mom and music was playing in the grocery store. Often, that’s something we don’t even notice. Because I had my young children with me who were not inhibited, we all started dancing down the aisles with my mom. My daughter was like, “This is fun!” and my mom looked so relaxed and happy.

We still wanted to keep music in Mom’s life once she went into long-term care. At her home, we could play music all the time. My brother created a huge library of her favorite music on an SD Memory Card—about ten hours of songs from all of the musicals she loved—and we bought her a portable player that could play music from that card nonstop; some of the artists she loved were John Denver and Neil Diamond. This technology allowed her to have her favorite music playing beside her. I knew that if I turned it on before I left her at night, it would play all night; the music would still be playing when I got back to visit her the next morning. It didn’t disturb her. Instead, it helped her sleep. I love the idea of caregivers creating a playlist for their loved ones so that they can have music around them as much as they want.

Not only did music help with my mom’s stress, but it also helped us stay connected to her and gave us a window into the Mom we knew, as her reaction to music was the one thing that was the same as it was before the dementia. If caregivers are looking for ways to connect with their loved one, they might try doing some of the activities that we did with my mom. Having music around can also be comforting to caregivers. Mom always sang so loud and proud, and we had a lot of special moments seeing concerts and musicals together. Music was a lifesaver.