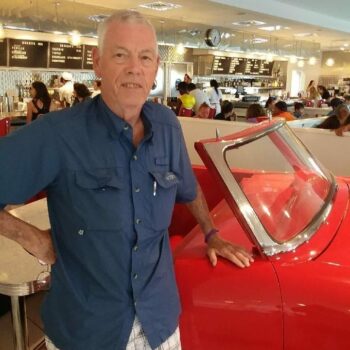 I don’t remember the day that I was diagnosed, but my daughter told me this: When they confirmed my diagnosis, I looked the doctor straight in the eye and said, “Let’s grab this by the horns and go with it.” The next morning, I looked up the phone number to the Alzheimer’s Association in Jackson and told them I wanted to help.

The question I get asked the most is, “how do you handle the fear that comes with a terminal illness?” Normally, I tell people that acquiring a strong work ethic as a child has helped me cope with my diagnosis. I have started to think about my life, how it has unraveled and other elements that have allowed me to stay grounded.

I was born in Jackson, Mississippi on November 28, 1945, which doesn’t feel that long ago. My parents met on a naval aviation base in San Diego where they both worked during WWII. Three months later, they married and soon after I arrived. They had my sister two years later. It was then that my father left so it was just my mother, sister and I.

Growing up with a single mom, I learned what it meant to hustle. As a family, we constantly had to work to have a home, food and clothes. This work ethic has carried into other areas of my life such as two tours in the army, going to college, teaching, serving as a manager at a Chevy dealership and now running my own delivery business, Birds Eye Delivery, delivering magazines, small papers and documents throughout metro Jackson, Mississippi.

Being a hustler also proved helpful when I was diagnosed with Alzheimer’s in January of 2013.

How Alzheimer’s Has Affected My Life

In June of 2012, my daughter knew something was wrong when I couldn’t remember an event that happened only days before. At first, my family and I thought it was connected to my arthritis, which had been getting increasingly worse over the years. Rather than speculate, my daughter took me to a family physician where I started six months of intensive testing. It wasn’t until January 14, 2013, that I was officially diagnosed with Alzheimer’s.

I don’t remember the day that I was diagnosed, but my daughter told me this: When they confirmed my diagnosis, I looked the doctor straight in the eye and said, “Let’s grab this by the horns and go with it.” The next morning, I looked up the phone number to the Alzheimer’s Association in Jackson and told them I wanted to help.

Since that day, my world has opened to so many opportunities. I’ve done radio, television and print media interviews all over Mississippi about my personal story with Alzheimer’s. I’ve had people from Switzerland, Indonesia, Canada and all over the world write to me, telling me they have heard my story. I’ve become an advocate for the Alzheimer’s Association’s Mississippi Chapter, doing special events for awareness and activism.

A lot of good has come from my diagnosis because it has given me a purpose and allowed me to reach out and help people. Sometimes, when I’m running my delivery service, people walk up to me on the street and share their story with me. It’s these types of interactions that give me hope to continue fighting and serving as an advocate for Alzheimer’s.

I am also not ignorant of the challenges that I have had to tackle in the six years since being diagnosed. I confuse dates, activities and details about my own life quite often. I have learned to cope with this by sticking Post-it Notes on my bedside table, in my truck and in the den to remind me what’s happening. I have little to no night vision and often have to put my hands on the wall when I am walking down the hallway at night. I used to be a prolific reader but nowadays reading and even watching television is difficult for me. These are the daily struggles I have with Alzheimer’s.

Advice for Other People with Alzheimer’s

Coming to terms with the news that there is no cure for Alzheimer’s is difficult, and you may feel like there is no way out. Through my experiences, I feel like I have finally developed a guide for myself—and perhaps for others—about how to take on life:

These loose rules help me continue to live a full and meaningful life. Now when I think of the question, “how do you handle the fear?” I know it is not only the strong work ethic I gained as a child that helped me overcome it. Hope and determination continue to drive me through life. I know that I will never quit, never stop spreading awareness about my story and the life Alzheimer’s has given me. I know that I will fight and hustle until I can’t any longer.