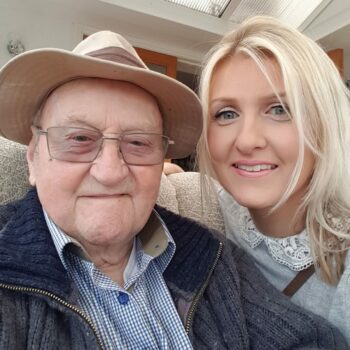 Nurses should keep in mind how important it is to interact with dementia patients. If a patient is shouting, aggressive, wandering around or throwing things, there’s typically a reason for that: While they may feel sick, another reason is that they’re scared.

My dad has vascular dementia. I’m a charge nurse in a general hospital’s ward for elderly patients in Wales, so I’m surrounded by dementia at work and home. Funding and resources are a big issue for our National Health Service in the United Kingdom right now, so it’s difficult to recruit nurses because their job often involves work that two nurses would normally do. Because they’re so overwhelmed, the nurses may overlook the fact that each patient with dementia is an individual and should be treated with dignity.

Nurses should keep in mind how important it is to interact with dementia patients. If a patient is shouting, aggressive, wandering around or throwing things, there’s typically a reason for that: While they may feel sick, another reason is that they’re scared. Dementia patients need a lot of reassurance. Our hospital is trying to implement strategies that will calm patients. Nurses need to respect each patient as an individual, treat the patient with dignity and remember that patient was once just like you or me. Every person with dementia has a great history and stories.

In the hospital where I work, there are dementia support workers who sit with patients and do activities with them. They often take dementia patients to a room and play old music or show them photographs. We also use twiddlemuffs, colorful, knitted muffs that patients can put their hands in. Volunteers in the community donate them and we give these to patients so that they can fiddle with them. Similarly, if someone has an IV in their arm for a drip, we use knitted cannula sleeves that cover it so that patients do not feel scared or try to pull it out.

I learn a lot at home and from the Facebook support group I manage that I try to transfer to work. My parents live nearby. At the moment, the hospital I work at is in its infancy with developing dementia services and I’ve just transferred to this department. Previously, I worked in a very busy acute medical unit. Although I’m new to this job, I have a lot of ideas about developing the ward for elderly patients, and we’re going to another hospital next week to look at what they’ve done. I’m also starting a master’s degree in dementia care soon, so I’m hoping to become a dementia specialist nurse.

Unfortunately, my dad is in the last stages of the disease. He can’t read a book or magazine anymore. He used to like drawing and painting, but shows little interest in that now. In fact, he was a great craftsman who used to make miniature models of nativity scenes, bird boxes and workshops containing miniature tools. After he developed arthritis, he stopped creating these models. In the past, we tried to give him as much mental stimulation as possible. To prevent him from becoming bored or depressed, we signed him up for a daycare unit that he goes to twice per week. In the U.K., people are entitled to daycare. Boredom may lead to aggression or behavior management issues, so if it’s possible to send your loved one to a daycare center, I would recommend that. He also likes his teddy bear, whom he calls Ted. He won him in a raffle at the daycare center, and talks to Ted and shows him a lot of affection. He loves watching my two-year-old daughter play with Ted; I’m sure he thinks he’s a living Teddy bear.

For those who are in the early stages of dementia, I think coloring books, word search puzzles, picture books or computer games are helpful. Another activity involves getting a cutlery tray, writing “forks” and “spoons” on the tray and asking your loved one to sort the cutlery. You can also ask them to sort money. Something I want to use in our hospital are latchboards, which are boards with various locks on them. Then, patients have to try and unlock them. They’re brilliant and I strongly advise families look into this device. The joy Ted has brought my dad makes me think we need to invest in a robotic dog at the hospital. I mentioned the robotic dog to my manager, but we’re worried it may pose an infection risk after being passed from patient to patient. The dog would have to be easily wipeable to prevent cross-contamination. We’ve discussed getting the latchboards though, plus reminiscence memorabilia from different eras.

I often pass information on to patients and families about the services they are entitled to post-discharge. Most families are ill-informed about their entitlement. In the U.K., there are a lot of support services in the community for people who have dementia, including psychiatric services or physical and occupational therapists who make sure people have enough equipment in their homes to help them. Normally, dementia patients are also assigned to a social worker, and they’re entitled to respite care for about four weeks per year. I would recommend people get a social worker for their relative to get additional advice. Caregivers should try to get as much help as possible, whether it’s in a hospital environment or the local community.

Caring for my dad has made me a lot more empathetic toward those with dementia and more informed as to what services are available. I have also become more aware of how mental stimulation impacts behavior. I try to be as involved as possible with patients who are suffering from high levels of stress and anxiety by interacting with them and giving them what limited resources we have to alleviate their anxious state. In my experience, boredom creates a quicker decline. My dad was a funeral director by trade and a naval officer in his younger days. He was a very proud man who has had a lot of achievements. Because of my experience as a nurse and caring for my dad, ensuring that dementia patients have the best quality of care is a cause that’s very close to my heart.

Rebecca Lloyd Lewis is a junior ward sister in the NHS in the U.K. who helps run a ward for elderly patients in a general hospital. She is also a caregiver for her father, who has vascular dementia, and runs the Facebook group Support for Vascular, Alzheimer’s & Mixed Dementia.