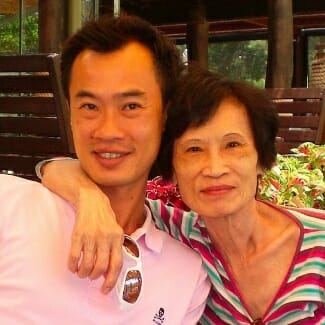 Even though she may have lost all of her memories of our relationship as mother and son, some of these memories resurfaced and came back to life for me. If she didn’t have dementia, I would probably not have dug deep to revisit and treasure these memories, which reminded me just how lucky I am to have a mother like her.

“If mummy isn’t really the mother I’ve known all my life, then who am I?” This was the most frightening question I was forced to address in my entire life. It was March 2017.

When mummy was diagnosed with dementia in June 2014, I started to occasionally entertain what I believed was a remote possibility: that she would one day forget everything and everyone, including me. But I always shrugged it off, because I could never quite imagine we would ever have this kind of cruelty exacted on us. The fact that she was still very lucid after the diagnosis concealed a large extent of the devastation we were to experience. That, or we were in denial and refused to see that it was coming.

So, when her dementia took a sudden, drastic turn for the worse about three years later, I was caught completely off guard and was mentally ill-prepared to help her because I was stuck in the past. I resisted the parent-child role inversion that inevitably took place.

First, she became someone I didn’t really know. It was like she suddenly had a body double, a very formidable adversary who over-shadowed her and whom I had to contend with. This body double looks like her but behaves very differently — she’s irritable, shouts loudly, says really strange things and is mostly dependent on help for basic daily living activities. In contrast, the mother I knew and loved for almost 50 years had always been easy-going, logical, mild-tempered (even shy) and mostly independent.

Secondly, she no longer seemed to know who I was anymore. I had become a stranger in her eyes, and this felt like a large chunk of my history had been mercilessly amputated without my consent.

Something a friend once said, however, helped me to see a positive side to mummy’s dementia. While it wasn’t at all intuitive to see it this way, I have to admit that mummy’s dementia came with a blessing.

Even though she may have lost all of her memories of our relationship as mother and son, some of these (or at least my version of these) — banished for many years into the deep recesses of my memory store — resurfaced and came back to life for me. These memories, some dating back more than 40 years, reinforced what defines her, what she means to me and the many lessons she taught me. If she didn’t have dementia, I would probably not have dug deep to revisit and treasure these memories, which reminded me just how lucky I am to have a mother like her.

I also learned to accept that there will be new memories, including very different or unpleasant ones, that complement and co-exist with the old, fond ones I have of her.

Her facial expressions, for example, have changed so much that it feels like at least half of her life as we knew it has been drained out of her. Her usual cheerful demeanor has mostly been replaced by a permanent frown and a look of dejectedness or emptiness, save for the brief moments we manage to make her laugh or smile. Helping her with her daily activities, such as feeding her and changing her diapers have gradually become normal to me, just like it was normal to her when she took care of me when I was a child.

Accepting and living with these two realities — retaining the role I’ve always played as her son, and taking on an additional role as a parent to her body double — was the only way for me to take better care of her, and find the path out of the elaborate labyrinth of pain I had constructed for myself.

Roger Pua is the author of “Sundays are for mummy: What if memories could live forever.” He hopes it will help others currently living with dementia better navigate it. Unexpectedly, he found that the process of writing the book was also cathartic for him, and he encourages caregivers in similar situations to do the same.