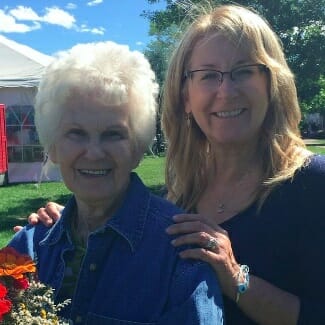 My goal and the goal of our family became to make her feel happy and loved as much as we possibly could. I think it made it a difference to her. It certainly made a difference to us to see her happy.

Taking care of Gummy wasn’t in my grand plans. My kids had just finished college. I’d managed to escape the tech world and get a couple fiction books published, a lifelong pursuit. I wanted to finish my next book, take up yoga and become the carefree woman I’d always dreamed of being.

I didn’t want to take care of my mother-in-law. That might sound selfish, but I’m being honest. I knew Gummy kept getting lost and forgetting things, like who was alive or dead, if she’d eaten, if the stove was on or where that grandchild she’d so confidently promised to keep an eye on was.

Gummy had been my mother-in-law for over thirty years. We never lived near each other, but it’s possible I spent more time with her than people whose in-laws live across the street from them. That’s because Gummy loved her family beyond all reason and no matter where work may have taken us to live, she often came to visit for weeks at a time.

Once I agreed with my husband that Gummy could come stay with us, I realized that all that time we’d spent together helped us now. I knew Gummy’s stories after she’d forgotten them. Storytelling comes in handy with memory loss.

What I wish I’d known is that while Alzheimer’s can steal memories and bodily functions, your person is still in there somewhere. Your job is to find them, however briefly. I found that stories and songs can offer an escape from the terror of memory loss.

Gummy had both Alzheimer’s disease and vascular dementia. We didn’t know that at first. She was a smart, clever woman with a quick wit and a fun-loving, somewhat naughty, extroverted personality. Until we had her living with us, we had no idea how bad her memory had become. She was fit, fast and athletic, and could charm doctors and strangers with a joke and a story.

She filled out a medical form as I sat with her. She wrote her name and birthdate, though I knew she didn’t know where we were or why I was there. When she read, “Race” off the form out loud, I knew she didn’t understand the question. She considered for a moment and said, “Human, of course.” Everyone around us laughed. I did too, but I wasn’t fooled.

By the time we had intervened and moved Gummy in with us, her disease was far more pronounced than we understood. At her first medical appointment she couldn’t draw the clock or answer most questions. I still didn’t understand how bad it was even after the doctor pulled me aside and said, “I am so sorry. This is the worst test result I’ve ever seen.”

Living in a different state, we’d thought our frequent phone calls and occasional visits had let us know how she was doing. It hadn’t. Gummy had almost no short-term memory.

With Gummy it didn’t matter how many times I told her where we were or why, she couldn’t hold onto it for even ten seconds. I’d say three seconds, long enough for her to say, “What, nobody told me. Hey, why are we here?”  No matter how many times I said I’d be in the shower for a few minutes, mere seconds would pass before I’d hear her frightened voice, “Hello? Is anybody else here?”

Despite the severity of the memory loss there were good things. She loved to laugh. If she’d begin to get scared, I could often redirect her and launch into a story. She couldn’t follow a movie plot, but I took her to every kid movie that came out and they held her attention. Eventually we moved her into a memory care place nearby, but either I or another family member visited or took her on an outing almost every day.

We had to. She couldn’t calm or center herself without familiar faces and distraction. Instinctively, I knew not to correct her. There was no point with almost no short-term memory to hold onto the new information. I also became convinced that while Gummy couldn’t remember what was said or what we did, she could remember how we made her feel.

My goal and the goal of our family became to make her feel happy and loved as much as we possibly could. I think it made it a difference to her. It certainly made a difference to us to see her happy. I never said, “Do you remember?” I’d say, “Gummy, I remember the time you went parasailing,” “I remember the koi pond you built,” “I remember that time the dog jumped into a puddle of oil and I told you, looks like we need a new dog—but you washed him clean.” Sometimes she’d interject things like, “You never did have any patience for cleaning anything,” “That sounds like me, girl,” or, “I think I remember that.”

I became Gummy’s memory for her. I told her more stories than I’ll ever write. I never did finish my book, but I wrote another one for the both of us, Nobody Told Me, Love in the Time of Dementia, because one thing Alzheimer’s taught me was how to love. It’s the only thing that disease can’t destroy. It’s enough.

Stephanie Karfelt is a writer and author of Nobody Told Me, Love in the Time of Dementia.