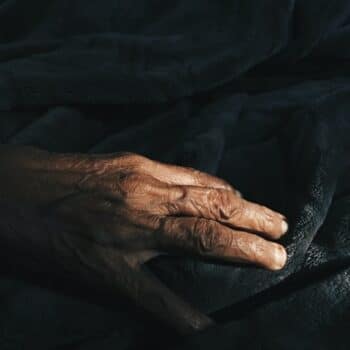 During the end-of-life process of each of caregiver Trish Laub’s parents, she came to realize that with a respect for their lives, came specific language and word choices in talking about death.

There was a beauty in the end of my parents’ lives that is beyond words. Of course there was great sadness, deep grief really, and a bit of relief that they were leaving me before it became impossible to maintain their dignity and the quality of their lives. Each parent simply, peacefully went to sleep for several days, as though they not only knew that they were at the end of their lives but also accepted the process.

During the days that they slept, my sisters and I continued to care for them until the systems inside their bodies ceased. In the individualized transition spaces we created for each of them, we continued to carefully clean them, shift their positions every two hours and provide medication to ease any discomfort. We washed their faces, brushed their hair and held their hands. We spoke with them until their last breaths. It was a process of honoring their unconditional love and well-lived lives.

I was there for each parent’s last breath, and—although some might disagree—for me, witnessing the first and last breaths of a human life are two of the most intimate experiences possible. It is a privilege.

I must share a thought I expressed in “Peaceful Endings, Guiding the Walk to the End of Life and Beyond”:

In America we prepare for the beginning of life, the arrival of a new soul, a baby, with gender reveals, baby showers, excitement and good wishes. Choices for the birthing process include everything from hospitals, facilities and medical doctors to a home water birth with assistance from a midwife. Pain management options include medications and a doula to provide support and comfort prior, during and after the birth. The phrase “birth plan” is often used. We offer our love and time to do whatever is needed to welcome the new baby and help the happy, but tired, new parents.

In stark contrast, we do our best to ignore the fact that every life ends. We are a culture that denies death and therefore its dignity.

During the end-of-life process of each parent, I realized with the sense of sacredness that respected the lives they had lived on their own terms, came specific language. It was not a thought but instead a description of an experience. Surely my parents’ would die, in the physical sense of no longer having life, but what I witnessed was a process during which life passed away from them and the energy that was their life force transitioned to what lies beyond. Describing my parents’ deaths as transitioning was not a way for me to avoid saying that they died, but rather the recognition that, as Albert Einstein discovered, “Energy cannot be created or destroyed, it can only be changed from one form to another.”

My friend teaches a class on the end of life to third-year medical students. She has to play games with the students, who are trained to save and prolong life, to get them to utter the words death, die and died out loud. The medical profession is based on the physicality of a body. If the body ceases to live, it dies.  Perhaps the medical community needs to remain somewhat clinical and detached, by using the seemingly technical words to create separateness, in order to protect themselves as they face death sometimes daily.

Looking back on what I witnessed with my parents, outside of any religious context, I wondered: when the body dies, does the person? Or, does the energy that was the person go on to be somewhere else? Witnessing my parents pass away afforded me a process of beauty, a transition from one form of energy into another, as I witnessed their spirits leave their bodies behind and exit the world they once knew to be real and in which I would remain.

“It’s the gradual unraveling of a life, and a slow and gentle letting-go,” said Felicity Warner, Founder of the worldwide Soul Midwife movement, which aims to ease the passage of the dying and ensure that the end of life is a dignified and peaceful experience.

Each reference to the end of life process carries with it assumptions, implications and connotations, none of which necessarily reflect nor negate specific beliefs. Each of which, however, allows for a different end-of-life experience. When I use the words death, die and dying in reference to the physical event and the words transition/transitioning and passing away to refer to the process of the end of life, it leaves the possibility for beauty.

Yes, my parents died and are dead, but what I experienced was a beautiful passing away and a transition to the pure light of energy that lies beyond. When my husband’s mom passed away, he said that his mom “peacefully went to sleep and stayed in her dreams.” As with my parents, I would add that they all thereby transformed our memories into starlight, which will go on forever.

Trish Laub is the author of The Comfort in their Journey book series. This article is part of the Words Matter series, in which she discusses language, communication and the way it affects those living with Alzheimer’s or cognitive impairment.