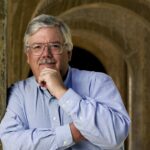 Henry T. (Hank) Greely is the Deane F. and Kate Edelman Johnson Professor of Law and Professor, by courtesy, of Genetics at Stanford University. He specializes in ethical, legal and social issues arising from advances in the biosciences, particularly from genetics, neuroscience and human stem cell research. He is President of the International Neuroethics Society; directs the Stanford Center for Law and the Biosciences and the Stanford Program on Neuroscience in Society; chairs the California Advisory Committee on Human Stem Cell Research; and serves on the Committee on Science, Technology and Law of the National Academy of Sciences; the National Academies’ Committee on Developing a Research Agenda and Research Governance Approaches for Climate Intervention Strategies that Reflect Sunlight to Cool Earth; and the NIH BRAIN Initiative’s Multi-Council Working Group, whose Neuroethics Division he co-chairs. He published The End of Sex and the Future of Human Reproduction in May 2016.