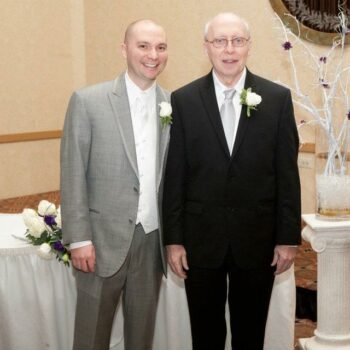 Use your skill set. Find ways that you can help the primary caregivers. I work in the financial sector, so I helped my mother and sister figure out how to get my father qualified for Medicare and Medicaid. Since my father was the one who had been working and needed to retire, I also helped my mother move funds around.

Aaron Clark lost his father, Erik, and his grandmother, Jane, to Alzheimer’s.

I was 14 years old when my grandmother was diagnosed with Alzheimer’s at 80. Initially, I didn’t understand the diagnosis. Her present became her past, and she thought that my father was her brother and my aunt was her sister. She was a librarian and a minister’s wife. Before her diagnosis, she had always been proper and well put together. Alzheimer’s stole that from her. As a young adult, I had difficulty realizing how important it was to still visit her, even when she didn’t act like “grandma” anymore. However, my grandfather spent time with her every day and treated her just as he did before the disease took her away. He set a great example for how I think family members should treat Alzheimer’s patients.

When my father was later diagnosed with Alzheimer’s, my family was surprised. He was 62 years old and still working. He began making mistakes at work that were uncharacteristic of him, and because his job involved others’ safety, he retired early. Since I lived several hours away from my parents, my wife and I saw my mother and father every few months. Each time we visited, I noticed changes in my father that my mother and sister couldn’t see, because they were with with him every day. He became increasingly dependent on them.

While I wasn’t my grandmother or father’s primary caregiver, I would share the following advice with others who are in a similar position: