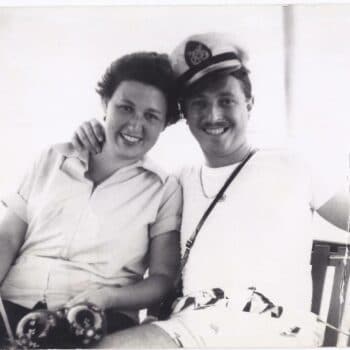 A decades-old photo of Lyssa Goldberg’s grandparents in Cuba spurs reflection on language, identity and family.

Cómo Mi Abuela Perdió Su Lengua, Y Yo También: How My Grandmother Lost Her Language, and So Did I

What a happy couple. They’re sitting on a boat, captured in a moment of nautical bliss — posed, smiling, and unrecognizable. Jaime with his sailor’s hat, clean-shaven aside from a thick mustache, and Gela by his side, with a pair of maracas in her hand as she leans against him.

In Jaime’s left hand is a pair of sunglasses flung casually to the side, while his right hand caresses Gela’s neck. The void between where their heads and shoulders unite creates a diamond-shaped window into another world: mid-1950s Havana, before Fidel Castro came to power.

I’m looking, really looking, at this photo that my uncle found after searching through my grandparents’ emptied home last Thanksgiving. I’ve seen black-and-white photos of them before. But here in this picture, and now especially, they look so different from the grandparents I grew up with.

Frankly, his haircut was still the same, and I recognize the curve of her nose that she passed on to me, but there’s a spark in my grandfather’s eyes I never saw in the 20 years that I knew him. So much has changed. He’s gone now, for starters, and her memory is gone now, too.

I bet they didn’t speak a word of English back then. It doesn’t seem like they had any clue they’d need to — that is, to leave all their belongings behind in Havana, take only their one- and two-year-old sons and their wedding rings with them, and learn the English language in order to build a new life in the United States. A few decades earlier, both of their parents had done the same when they had to leave Eastern Europe and start families in Cuba.

My grandfather learned to speak English — I know he did — but the stubborn, old Cuban man that he was, he loved to refuse to speak it.

“How are you today, sir?” a cashier at Publix might ask him. After he retired, he went to the Publix grocery store almost every day.

On a good day, he might half-smile back uncomfortably, tightening his mustache into a bundle, and then walk out with his grocery bags full of two-for-one cupcakes and 2-liter soda bottles.

With me, he was curt, but at least he tried.

“You have no school today?” he would ask me every weekend.

“Yep,” I’d say and smile back, worried that if I said too much, he wouldn’t understand.

My grandmother used to speak English perfectly, but she barely speaks it anymore.

“Wita, how are you? Did you enjoy lunch?”

I couldn’t say Abuelita when I was little, so I took the liberty of shortening it, and Wita stuck.

Translation: Yes, I think that the bride does not appear on the lips. I never learned to speak Spanish fluently, but I know enough to understand that she’s only speaking nonsense.

“What bride, Wita? Where did you see a bride?”

Translation: Something about boots and health. I don’t know any Yiddish, and didn’t even realize my grandmother spoke it until the Alzheimer’s got this bad.

“What do you mean, Wita? Are your shoelaces too tight? Do you want to go for a walk?”

Back to Spanish again. It seems she thinks the window walks to the store without shadows.

It’s not uncommon for late-stage Alzheimer’s patients like my grandmother to lose their ability to carry on a conversation. As their cognitive functions decline, language processing skills can become impaired.

Translation: Wita can no longer say what she means.

It’s in these moments that I regret not practicing my Spanish with my grandparents when I’d had the chance. Maybe if I had, I would actually be fluent. And maybe if I truly understood the language, I would be able to unscramble what Wita meant to say, even if her Alzheimer’s stops her from getting all the words right.

During this conversation, we’re probably sitting in rocking chairs in front of the fourth floor TV in the Miami Jewish Home’s Chernin Building, where Wita has lived for four years. Or if it’s a bit earlier in the day, I’m trying to get her to talk to me as she’s still having lunch.

I’ve gathered that the disease takes her mind back to Cuba, especially when she sees my father and calls him her brother. Maybe when she speaks to me in Yiddish, she thinks she’s talking to her mother, who continued to use Yiddish in Cuba the way my own grandparents held on to their Spanish in the United States. When Wita speaks now, however, it’s not merely Spanish or Yiddish. It’s like she’s created her own made-up, mashed-up foreign language that imparts whatever meaning I make of it.

Wita comes to me in my dreams sometimes, speaking to me in English, the way I will always remember her. She stands tall, with a vigor about her that rivals the agile grandmother who used to push me in a stroller from her home to the park nearby. She exudes the same tenderness that she did when she’d visit my house every weekend all the way through early high school.

As I sleep, I talk to her the way I can’t anymore. I tell her about how well I’m doing in college, about to graduate, in fact. But I say that I wish I’d learned all the Spanish I could in 5th Grade when she started teaching me words and phrases after school.

When my grandfather left us last year, it struck me that Wita would never even know she lost her husband. Maybe that’s a good thing. But it also means that now I can’t hear my grandparents hablan en español once a week and hope to pick up new Spanish vocabulary along the way.

The photo of my grandparents that my uncle found had been sitting in a closet filled with memories: boxes of family albums, a foreign coin collection, their assortment of gaudy jewelry. All of these remnants are the traces of my grandparents’ past, the life they lived here while holding onto their love for Cuba.

These mementos shouldn’t have been secrets stuffed inside pockets of old guayaberas (the typical Cuban linen shirts my grandfather wore like a uniform). If I had been able to connect with them in their native language, I would’ve known more about my own grandparents and the rest of our family. In Spanish, I could’ve asked them all the questions that their forsaken belongings have now started to answer.

Looking at this photo again, now saved on my phone for me to peek at from time to time, I see more than a happy couple sitting on a boat. I see the direct connection I had to a history I’ve only learned of through textbooks. I see the people whose life experiences it took me too long to be curious about. I see the missed opportunity for real conversation, but I see my motive for putting together the pieces of my family’s story.

Lyssa Goldberg is a writer and editor in South Florida. Lyssa wrote this essay about a decades-old photo of her grandparents in Cuba one year after her grandfather, Jaime, passed away. His wife, Gela—Lyssa’s grandmother—had Alzheimer’s in her old age. She has also passed away since this was written.