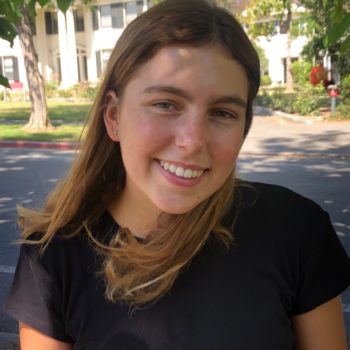 For me, it’s hard to interact with people who have Alzheimer’s or dementia, and the reason I joined the Rosener House club at my school was to interact with people who similarly undergo cognitive decline. But what I realized is that because of my family connection, and because I have seen firsthand the before and after, connecting with my grandparents is much more difficult.

My mom’s dad was diagnosed with dementia about seven years ago. Before his diagnosis, he used to be very active and fit, and his favorite pastime was going on bike rides. However, during these trips, we noticed a pattern of memory loss and confusion when he started to get lost or fall.

This was a scary reality for both him and us, and this was when we began to look into the possibility he had dementia. Post diagnosis, he continued to live with his wife, my maternal grandma, who used to be his caretaker.

Around three years ago, he ended up moving into an assisted living facility because my grandma couldn’t continue to take care of him; however, she still visits him everyday and they live in the Bay Area, so we have been able to visit them pretty frequently on weekends as well.

Everyone copes with the disease differently. For my grandad, he enjoys sitting in his bed and watching TV. He was never a super talkative person, but when we visit, it’s hard to maintain a relationship with someone who finds the most comfort in watching TV, and is otherwise not super mobile or sociable.

However, he does remember specific things about my life that he always asks about. While his memory slips his mind, we try to spend family time together whenever we can.

The interactions are pretty limited because if we go to visit him or sit in the room talking with him, there isn’t much else we can do. And if we go to my grandma’s house, he can only stay there for so long before needing to return to the facility.

Regardless, I can tell he enjoys our company and the nonverbal but comfortable interactions. While he recognizes that his physical condition is weaker than before, he doesn’t realize he has dementia, and therefore asks for a bike for Christmas because he doesn’t know he can’t do that anymore.

Similarly, his memory loss has affected his own understanding of his lifestyle, which means that his routine of staying in bed and watching TV is something he perceives is no different from his “life before diagnosis.” This isn’t necessarily a bad thing though—because of this, he seems content with his life, watching sports and the same reruns and shows, surrounded by friends and family.

My paternal grandmother has had a much more rapid cognitive decline. She lived in the South Bay in California for a while, so we used to visit her roughly once a month. Initially, my dad was in denial about her condition. He thought that she was just experiencing hearing loss, and he developed a bit of tunnel vision until her diagnosis confirmed it was Alzheimer’s.

When I was a freshman, she moved to the Bay Area and lived pretty close to us. It was hard because my family and I spent a lot of time with her every weekend and it was a pretty big time commitment. For a month, she lived in our house, and for me it was difficult to not blame her and get mad at her.

My dad was also pretty frustrated because seeing his mom undergo Alzheimer’s and her decline was something he wasn’t really mentally prepared for. When she would ask the same question or just not understand something, it would be really frustrating to just spend that much time around her.

The general situation was upsetting, and I was struggling because she disrupted our daily lives in an emotionally exhausting way. Of course, I understand that the disease’s symptoms are inevitable, and I can’t really blame her. But, for example, we would be eating dinner or doing homework, and she would come in, sit with us and ask us questions.

We love and care about her of course, but it was just hard to balance that and schoolwork and just adapting to these new routines. We just couldn’t do much when she was with us.

She asked to move to Florida to be closer to her family, and while we supported her, it was definitely a hard transition for my dad. To him, we were her family. Since then, I have not visited her at her assisted living facility, but my dad does occasionally and her sister visits weekly.

My dad also facetimes her, but he prefers for my younger sister and I to not join the call, as her decline was and is rapidly going downhill. My sister did not know much about what was going on, so seeing our grandma would be pretty tough to understand.

Regarding the logistics, my dad talks a lot with his aunt about the program, and takes on less of an emotional viewpoint, focusing instead on how the conditions of her living facility are. While my maternal grandma is much more willing to talk about her experiences as a caregiver, my dad’s side talks less about Alzheimer’s and dementia.

But what I realized is that because of my family connection, and because I have seen firsthand the before and after, connecting with my grandparents is much more difficult. At the Rosener House, I could talk easily with the participants, but because of my personal understanding of the effects of Alzheimer’s, it didn’t really apply to my situation with my grandparents.

I don’t know if the disease is genetic on both sides. Our family (including extended members) is always trying to take precautions to prevent their risk of getting Alzheimer’s or dementia. For example, there’s this chemical in deodorant that causes Alzheimer’s, so we look for things like that. Or, other people play brain games to keep stimulating their brain.

Personally, I’m a bit nervous about the disease because older family members before my grandparents also had the disease, on both sides of the family, but they haven’t gotten gene tested because it’s hard for people with memory loss to sit still. My grandma, undergoing an MRI, or simply being sat and told what to do, would not have willingly listened to medical professionals. She would get confused and become distracted.

We definitely don’t talk about her or Alzheimer’s that much in my house. It’s not like my parents are withholding this conversation from me; they’re willing to talk, but it’s just a hard and uncomfortable conversation to be had.

To cope and understand more about the disease within our family, we buy these bracelets from Rivet Revolution, a company that raises awareness for Alzheimer’s through jewelry. Each member of our family with Alzheimer’s or dementia owns a bracelet, and while we don’t talk much about it otherwise, there is a lot of support in our family as well.

Looking back, I do wish I was a bit more patient and understanding. I was also only a freshman, and I had a vague idea but otherwise no clue about what it meant to have a disease like Alzheimer’s. At the same time, this is in hindsight where I see her less frequently and she lives in Florida—it’s easy for me to say I wish I had been more patient and understanding, considering I’m not there now.

Regardless, I have the opportunity to visit her if I want, and while I worry about seeing how she has declined, I also obviously miss her and want to be there for her.