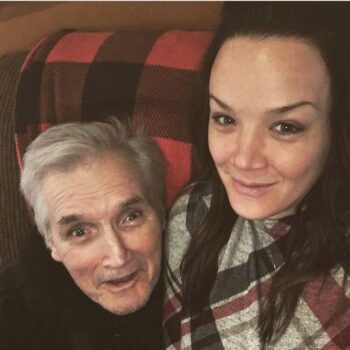 I also played music in the hospital from my phone. My dad often danced down the hallway and went into other residents’ rooms, then started singing or dancing. He may be angry, happy or sad, but whenever music comes on, he changes and starts dancing, which is how he got the nickname Rockin’ Ronnie.

One afternoon, I came home and found my parents having a physical altercation. My dad was holding my mom’s arm. Eventually, I had to call the police because my dad wouldn’t let go of her. The police escorted my dad back to the hospital. He yelled, “I hate you! I’ll never forgive you!” My dad had never been an aggressive person and I’ve always been a daddy’s girl, so that day was the most devastating day of my life.

Several months before this experience, my dad was officially diagnosed with dementia. Two years ago, he fell down a flight of stairs and had a massive stroke. While we believe he had dementia several years before he fell, the stroke likely exacerbated his dementia symptoms. After his stroke, he was in the hospital for about three months. The nurses told us he had been acting aggressive while in the hospital. When he was discharged from the hospital, he went back home to live with my mom again. I live in Toronto, about an hour and a half away from my parents. My mom called me to tell me that my dad had been acting aggressive lately. She’s 66 years old and my parents lived alone in a large house in the country, so I was concerned about my dad, and my mom’s well-being.

The day I found my dad grabbing my mom’s arm, I felt heartbroken, but also relieved I had been there to help my mom. I also wanted my dad to get the help he needed. After the police took my dad back to the hospital, I visited him frequently, but often left the hospital in tears because he told me he didn’t want to see me and that it was my fault he was back in the hospital. Part of him remembered that I was the one who called the police. Seeing the kind, loving person I knew act this way toward me was terrible. I was determined to find a way to improve my dad’s mood and his quality of life.

Because I felt alone, I signed up for the Young Leaders Council for the Alzheimer’s Society of Toronto, which is a group of young professionals who discuss how to help the Alzheimer’s community and volunteer. During a meeting, they introduced me to their Music Project. They give free iPods to anyone who qualifies for the project. On the form, I had to answer questions about the year my dad was born and the types of music he enjoyed so that they could put his favorite songs on an iPod and mail the iPod to me in about one month. However, I realized I couldn’t wait that long to reconnect with my dad, so I bought an iPod and put all of his favorite 60s and early 70s rock music on it.

After I finished uploading the music to the iPod, I drove all the way to the hospital. When I first put the headphones on my dad, the transformation was amazing. He could barely speak, but he grabbed a stuffed monkey they had given him at the hospital, held the monkey’s arms and started dancing to the music. I thought, “Wow, this is actually working for my dad.” After that day, I started doing carpool karaoke with my dad each time I picked him up from the hospital. Now, I blast music as loud as I possibly can when he’s in the car and we sing. My dad has looked at me and said, “Damn, you’re making me feel young again!” I also played music in the hospital hallways from my phone. My dad often danced down the hallway and went into other residents’ rooms, then started singing or dancing. He may be angry, happy or sad, but whenever the music comes on, he changes and starts dancing, which is how he got the nickname Rockin’ Ronnie.

While music has changed my dad’s life, I’ve found other methods to relieve his agitation as well, including trying to provide him with a sense of normalcy. I’ve stopped babying him because he dislikes that a lot. For example, I have one video of my dad where he says that he can do push-ups. In the past, I might have been worried, but I said, “Ok, do push-ups.” He got down on the ground, started doing them and had a lot of fun. Initially, when we brought my dad home, we just had him sit down somewhere. Now, we ask him if he wants to help us with daily tasks. He helps us pick pine cones off the ground so that we can cut the grass, fold towels and we take him to shoot pool. We’ve noticed he enjoys himself because he feels like he’s helping out and providing for his family.

Something else that improved my dad’s mood was taking him off the antipsychotic drugs he was placed on. While I understand that these drugs may make doctors’ and nurses’ lives easier and that they have to protect other people in hospitals or care homes, it’s important for caregivers to remember that we are our loved ones’ voices. Research what doctors are using on your loved one. We found that the drugs made my dad lethargic and reduced his quality of life. Show the nurses that you’re going to be around all the time so that your loved one gets the care they deserve.

Having dementia does not mean that your life is over and my dad is a great example of that. To improve my dad’s mood, we used music, took him off the drugs he was on, provided him with a lot of love and had faith in him. Remember to allow your loved one to still have a life. These approaches changed my dad from an angry, aggressive dementia patient to someone who’s very loving and living his best life. This Father’s Day, my dad’s best friend and his wife are coming to my mom’s house, and we’re bringing my dad home this weekend. His best friend plays the guitar and sings, so he’s going to play live music while Rockin’ Ronnie sings along with him.

Danielle Dawson is a caregiver for her father, Ronnie, who has dementia. She also runs the Facebook group Rockin’ Ronnie’s Journey With Music And Dementia, where she shares posts that highlight how music positively impacts her father.