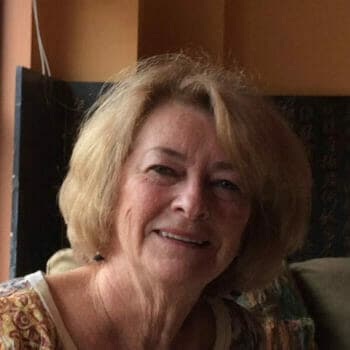 So many people have commented on how well I am doing, reinforcing my own observation after 45 years as an MPH and RN in long-term care, and pointing out that I am doing better than expected. I am now very anxious to get back on the drug.

Geri Taylor was a participant on the original Biogen trial, which was testing aducanumab for the treatment of Alzheimer’s disease and was abruptly canceled in March 2019. A few weeks ago, Biogen announced it will be resurrecting the trial.

Finding the Biogen trial was exactly what I had been looking for in a trial: a double blind study and the possibility of continuation on the drug after the study (open label trial).

Being in the trial was enormously uplifting for my psyche. I felt as if I was helping my brain and the researchers.  I felt that my cognitive abilities were more stable while in the trial.

Lastly, while in the trial I felt that I was cared about and cared for. Being on the team, I always gave it my best.  The outcome may have only been psychological, but that effect can carry one a long way.

How did you feel when the trial was abruptly terminated in March?

Some of you may be aware that the Biogen drug trial for aducanumab was surprisingly discontinued yesterday.  As you may know, this is one of the few trials that was thought to have some slowing of Alzheimer’s progression.

I am reaching out to you to keep you informed as I have felt that you, my friends and family, have been part of the team to better the lives of those with the disease. Further, I am asking for your thoughts. While I am disappointed, I am not discouraged.

We with Alzheimer’s will be in society for years to come and we will need support and accommodation. Thank you for your love, kindness and thoughts.

What happened after you stopped taking the drug this year?

The two greatest potential impacts of my not receiving aducanumab for six months are seen in my short-term memory and my speech.

Obviously, I cannot really know the effect of not having the drug during this time or whether having it would have made a difference in my rate of decline. But based on my sense of self, my short term memory declined more rapidly after stopping the drug, and the decline in my speaking ability began to have a more noticeable impact on my ability to communicate.

I am working to accept my language deficits in order to not make the issue worse by not being upset about it.

How did you feel when the news came that the trial may have been successful and that you will be restarting the drug?

I was delighted that the drug will be re-started. The reversal of Biogen’s findings was wonderful news for the entire Alzheimer’s community.

So many people have commented on how well I am doing, reinforcing my own observation after 45 years as an MPH and RN in long-term care, and pointing out that I am doing better than expected. I am now very anxious to get back on the drug.

Declining slowly can be a beautiful thing.