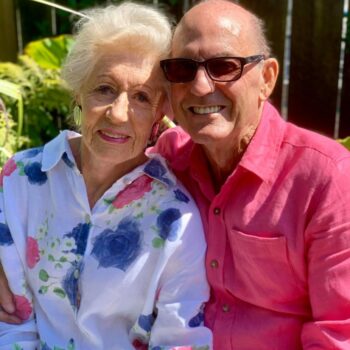 “After a neuropsychologist diagnosed me with cognitive impairment 12 years ago, a psychiatrist who read the neuropsychologist’s report prescribed me with drugs that are typically given to Alzheimer’s patients… When I came home and told my wife the news, we threw the pills away. I decided to focus on my lifestyle instead.”

Ian Hastings is 74 years old and lives in New Zealand. After being diagnosed with cognitive impairment, he decided to make various lifestyle changes. These changes have helped him lead a positive and fulfilling life.

After a neuropsychologist diagnosed me with cognitive impairment 12 years ago, a psychiatrist who read the neuropsychologist’s report prescribed me with drugs that are typically given to Alzheimer’s patients. He said, “If you take these pills once a day, hopefully they will slow down the progression of your memory impairment. There is nothing else we can do for you.” After I came home and told my wife the news, we threw the pills away. I decided to focus on my lifestyle instead.

My cognitive impairment diagnosis came after having three surgeries in the same year, several of which were to correct injuries I sustained while touring the United States with a baseball team years ago: ankle reconstruction, a knee replacement and a surgery to help reduce my acid reflux. After the surgeries, my memory started to fade. One day, I forgot to turn off the gas stove and when my wife came home, the smell of gas lingered throughout the house. That’s when the red flags began to raise.

While conducting research, I came across an article that said anesthesia may be linked to cognitive impairment and thought, “That’s what it’s got to be.” From that moment forward, I had hope that making lifestyle changes could improve my memory, or slow the progression of any cognitive decline in the future.

I believe that changing my diet, exercising and making mental health a priority have helped me stay sharp. Shortly after my conversation with the psychiatrist, I went to San Francisco with my wife and spoke to her friend who is also a licensed psychiatrist. He asked, “Do you drink alcohol?” While I told him that I don’t drink a lot because my wife doesn’t drink, he said, “If you’ve got anything going on in your brain, I would recommend that you stop drinking alcohol.” I have not had a drink ever since. Instead, I began to intake large amounts of fruits and vegetables every day. I reduced my dairy intake, eat more fish (particularly, the smaller, oily fish like sardines), reduced my sugar intake and drink more water. In addition, I regularly take brain health supplements that were recommended by a holistic doctor.

I focus on my mental health by doing 20 minutes of meditation in the morning, afternoon or before bed so that my brain remains active, I can focus on the present and avoid overactive thoughts, which I believe may lead to forgetfulness. I also participate in tai chi twice a week, which has been remarkable for me; it provides a balance to my gym workout so I’m not solely doing weights and aerobics, and it’s almost like learning how to dance. Research shows that dancing is good for your brain if something is going on, and I find that tai chi is the same. It’s great for balance, especially when you’re aging.

Since I was a police officer and detective for 33 years, I learned how to put things down on paper and develop a plan, which has included maintaining social connections. I’ve started pursuing new activities; for instance, I organized a coffee club for retired police detectives and we meet every so often. I facilitate the reports for the club and oversee the mailing list, which keeps my brain active. One of my friends was diagnosed with Alzheimer’s. I visit him in a healthcare facility four or five times throughout the week. I encourage him to go on walks with me, and I’ve realized how important it is for those with Alzheimer’s to maintain social connections. By helping others, I’m also helping myself. I get joy out of being there and helping my friend. It’s all good for my brain. It’s interactive! My wife has also showed me why connections with others are important for brain health. We have been married for 30 years and do so much together, including public speaking. It’s important to have someone around who can support you.

I try to keep my life as organized as possible. I have a sheet of paper called “rituals of my day,” which includes everything I need to do each day that should be repeated. I have my bowl of fruit in the morning, do my mediation and then I have my protein smoothy and supplements. I walk to get the paper, and also do a breathing exercise. Not only do I do gymnastics for my physical health, but I also do brain gymnastics. That is something that I picked up five or six years ago. I also use BrainHQ, a site that offers games related to different subjects. I spend 30 minutes a day doing my brain gymnastics. That has been very helpful.

I also wear a bracelet that says “uncover, discover and discard.” For me, it means that you should seek out information to discover what works for you and disregard any risks. Forgetting is not always bad. Forgetting can mean getting rid of all the rubbish in your brain. Being given those pills over a decade ago inspired me to make healthy lifestyle changes. If you’re able to disregard any rubbish in your brain caused by cognitive impairment through these changes, you’ll have a clear path.