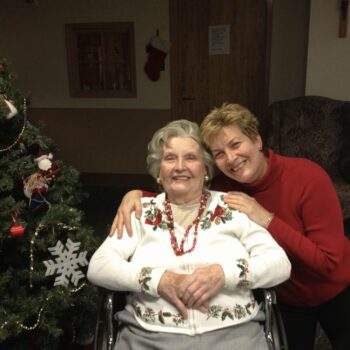 My mother’s story was filled with grace, and looking back, so was mine. I retired from science and entered seminary, all along visiting Mom, who was eventually in a nursing home. I got to know the other residents and families, and realized this is the work I am called to.

Janice Hicks is the co-author of Redeeming Dementia: Spirituality, Theology and Science, chaplain at Asbury Methodist Village in Gaithersburg, Maryland, and deacon at St. John’s Episcopal Church in Olney, Maryland.

“Death from Alzheimer’s can be peaceful and holy. Nature, touch, prayer, music and above all love endure during life’s passage — these are life’s essence, crucial not only for those who have dementia, but for all who are dying.”

As I accompanied my mother through her Alzheimer’s journey of 24 years, I didn’t know many things — especially not what to expect concerning her death. I had dreaded my mom’s death my whole life. I was a scientist then, and I visited her often. From early, middle and late stages of her disease, the visits changed me. I was especially struck by her spirituality, and these lessons fostered my growing appreciation of the transcendent, reminding me to hear “the ever-unfolding call that reality itself emits.”

Science cannot answer questions of spirituality. People say that the “self” is lost as a result of dementia. I never felt that my mother lost her “self,” even to her last day. Spirituality shone through in my mom’s radiant smile whenever she expressed her selfhood. My mother’s story was filled with grace, and looking back, so was mine. I retired from science and entered seminary, all along visiting mom, who was eventually in a nursing home. I got to know the other residents and families, and realized this is the work I am called to.

Regardless of one’s religious affiliation or even if there is no affiliation, we share common elements of spirituality. In a transition period that some call “the wilderness,” we are taught to look for synchronicity in addition to grace, such as signs, rituals, and the deep sense of connection and belonging. Death is not to be feared but rather viewed as a natural part of life, which many believe (and I do) to be a transition to a new level of being. For me, my mother’s death was the more important issue, secondary to her dementia.

The timing of mom’s death told me something. She had not been walking, putting words together, or recognizing any of us for several years. My mother’s nurse told me that she was barely eating a week after I graduated from seminary. I knew it was the beginning of the end. Was this a coincidence or planned on her part (or a higher power at work)?

Honoring ritual, we had the priest come to give the sacrament of the sick. After he left, mom, who had never been demanding and rarely asked anything of me, said lucidly, “Don’t go away.” (Had the prayers oriented her to allow her to say this?) There was a great deal conveyed in those three words. I was always the one traveling, and she let me know this was not the time to go. I cancelled a trip planned for the next week without hesitation. Mom let me know that she knew the end was near, she knew who I was, and she wanted me with her.

It was late spring and the garden was lovely, so we spent time sitting outdoors. She basked in the feel of the sun and breeze on her face. One day in the garden, mom said, “Good,” and it sounded biblical. I played hymns and her favorite songs using a cell phone and small speaker and sang. I read prayers aloud. She ate a few bites of favorite foods. Others in the family visited.

When she stopped eating completely, she stayed in bed, sleeping longer and longer. Hovering over her, the hospice nurse said that her vital signs were good and that it could be a week or more before she died. I suspected mom heard and thought about that. Mom had never dealt with difficulties directly, and she often coped through denial. The next day when mom was a little more alert, I told her, as is often advised in the hospice literature, “It’s okay mom to go. We will miss you but we will be okay.” I couldn’t stop my tears. She looked deeply at me. She had no words, but one tear rolled down her cheek. That tear told me again – that she knew who I was and that she was dying.

From the one lucid moment “Don’t go away” until the tear – what happened between? This kind of experience pushes us into mystery. Many families are reluctant to talk about death. I will always be grateful for this sacred breakthrough. We were both ready and at peace.

The hospice nurse said that as people are dying, they are busy processing. Giving them permission can help some let go and enter into a peaceful death. It was astounding to me that mom’s cognition seemed clear in these important tasks, and I strongly sensed that she was her true self.

Mother died peacefully the next day in her sleep. The call caused me pain but it did not destroy me. It didn’t surprise me that mom was not going to wait. She was ready, and it was time. While I would have liked to have been with her, I got the sense she was being protective, slipping away when no one was there, on her own terms. It was how she would do it. She was herself to the very end. We were all living in the face of what we don’t know, but I got the distinct sense that God knows what God is doing, and there is order in all of this – the grace, signs, rituals, nature, and connection.

Death from Alzheimer’s can be peaceful and holy. Nature, touch, prayer, music and above all love endure during life’s passage — these are life’s essence, crucial not only for those who have dementia, but for all who are dying.

As a chaplain now working in eldercare, I have used these lessons with the residents and families to whom I minister. I have been present with patients who have died and observed how they are all different. Some people hold on and fight, while others gently go. I witnessed a husband with dementia clear up and grasp meaning at the occasion of his longtime wife’s death. For those at bedside, this is an opportunity to listen, allow silence and connect deeply with your own true self.