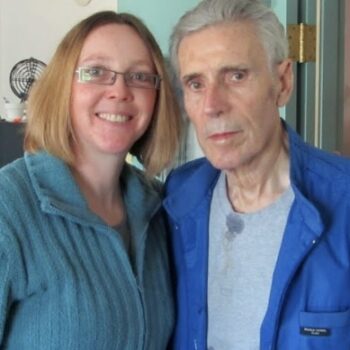 I started the Memories Project to help me work through my grief after my father’s death; this project eventually helped me connect with others going through similar experiences. My goal was to blog about one memory I had of him each day for one year, which I achieved. Through this process, I was challenged to reflect on memories of my father that I wish I had recorded sooner when he was still alive so that he could have contributed as well.

Joy Johnston is a digital journalist and award-winning author based in Atlanta. She writes about dementia and caregiving issues on her blog, The Memories Project. In 2017, she published The Reluctant Caregiver, a collection of personal essays on caring for her father who had Alzheimer’s and her mother who had cancer.

Not everyone is born with a natural affinity for caregiving. While I loved my parents and wanted the best for them, as an only child, I accepted the title of caregiver with reluctance. I was a long-distance caregiver for my father, who had Alzheimer’s, and then a hands-on caregiver for my mother, who was diagnosed with colon cancer just six months after my father’s death in 2011. Before my parents became ill, I only had a general understanding of Alzheimer’s and colon cancer. I often felt overwhelmed and unprepared as a caregiver, but the resilient human spirit that I saw on display, from both my parents and their caregivers, was awe-inspiring. My parents’ declining health and their subsequent deaths shattered my sense of security, while challenging me to take on a role I never imagined I could perform. The experience prompted me to become an advocate for those facing health challenges and their caregivers. Caring for my mother turned me into an advocate for family caregivers, who are often invisible and neglected by our government and society. Caregivers often aren’t heard and it may be even more difficult for them to find help if they live in a rural area with few resources or if they feel isolated.

I started the Memories Project to help me work through my grief after my father’s death; this project eventually helped me connect with others going through similar experiences, and inspired me to advocate for Alzheimer’s awareness. My goal was to blog about one memory I had of him each day for one year, which I achieved. Through this process, I was challenged to reflect on memories of my father that I wish I had recorded sooner when he was still alive so that he could have contributed as well. Some of my favorite memories with him include our visits to the library. When I was a child, he worked frequently and I was often in bed by the time he got home, so Saturday afternoons were our bonding time. We spent hours at the library each weekend because we both loved books.

Growing older and managing illness and disease in a rural setting comes with its own challenges related to finding care. I had just graduated college and moved to Atlanta when my parents decided to move from a Los Angeles suburb and retire in the mountain village of Ruidoso, New Mexico. Services that I took for granted in Atlanta were often nonexistent in Ruidoso, or in limited supply. I advise anyone to become familiar with the healthcare services in your parents’ area before a health crisis occurs. How close is the nearest hospital? How far do you have to travel for specialized tests? In Ruidoso, there were no memory care options at the time. My father was placed 1.5 hours away, where the nearest memory care center was located. This placed additional stress on my mother, who had to commute by bus to see him. As my father’s physical condition declined in his final months, the local hospital could not meet his complex medical needs. He was transferred over 3 hours away to Albuquerque, where he was placed in the ICU. The distance prevented my mother from visiting my father as much as she would have liked in those final weeks of life. While I fully support the concept of aging-in-place, we need to do a better job at delivering quality medical care in both urban and rural settings.

Another aspect of caregiving in a rural area that is sometimes overlooked is building a support network. For those with dementia, a strong support network can help with issues like wandering and respite care. Part of my father’s network was at the library. Even as he aged, he loved books. But as his memory declined, he’d go to the library, sit at the table and just take out the contents of his wallet. The librarians who had known him for years realized something was wrong and helped him by making sure he kept his money on him. Eventually, they told my mother what they had seen as well. I’ve found that establishing connections with neighbors or keeping track of places your parents visit frequently is helpful because people in small communities may start looking out for them.

In a rural setting, technology can be your friend too. Long-distance caregivers may be able to use technology to enhance their loved one’s safety. This can include things like tracking devices for those with Alzheimer’s to reduce the risk of wandering, security cameras, fall protection devices and home automation services. I got my mother a fall protection device. She wore a pendant around her neck and had a few falls. It was great because a live representative would come on the intercom installed in the house and ask if she was OK or if she needed emergency assistance.

As a long-distance caregiver, you can stay involved by participating in your parents’ retirement plans, including where they want to live, if they are open to moving into a residential facility if their health declines and what their end-of-life wishes are. Document your parents’ choices and check in periodically to see if any of their decisions have changed. If it’s one thing you can count on when it comes to caregiving, it’s change. Even if a parent is adamant about staying in his or her home, some people with dementia become a danger to themselves or others, requiring a move to a supervised facility. Be flexible and adapt to the needs of the current situation.

While it may seem like you have little control during periods of crisis, you can control how you apply the lessons learned to the rest of your life. Alzheimer’s runs in my family, so I plan on actively following genetic studies and I am participating in the Alzheimer’s Association Trial Match program, which supports clinical research. Life doesn’t stop because you are a caregiver or because someone you love dies. The same stress you dealt with before you became a caregiver, such as finances, relationships and your own health issues still have to be dealt with, and that’s why it’s important to have a support network made of family, friends, support groups or online communities. Don’t be ashamed to ask for help; it can make a positive difference in your caregiving experience. Only those who have been caregivers can appreciate the emotional, mental and financial toll that caregiving takes on a person.