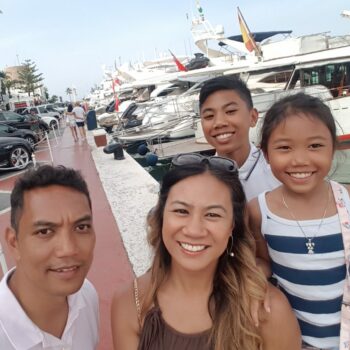 This year, we went skiing in Switzerland. Although we were worried he would not be able to ski, our friends encouraged us to let him do it. He didn’t manage to get very far and stood in the same place for two hours, but he loved it. These experiences help me continue bonding with my husband and I think they’re needed for both the carer and the person with dementia.

Michelle Macadangdang is a caregiver for her husband, Bambi, who has frontotemporal dementia. She is also a full-time regional manager for seven care homes in the United Kingdom and a mother of two.

Everything started on October 7, 2016. I got a call from the police at 3 a.m. My husband, Bambi, was supposed to arrive home from work by 10:30 p.m. I was half asleep and put my hand near the other side of the bed, but noticed that side was empty. The police said, “Mrs. Macadangdang, there’s no need to worry, but we have your husband here.” That frightened me. After I asked what happened, they asked if he had a mental health problem. “He gets confused really easily,” I said. At that time, I didn’t know he had dementia. I work in the industry and previously had a friend do a mini mental state examination on him, but I still didn’t think the confusion was caused by dementia. The police had told me he’d been driving on the wrong side of the road. Initially, they thought he was drunk driving, but they realized he didn’t know his telephone number. Later in the morning, I took my husband to the hospital because I thought his confusion might be caused by something physical. I knew in my heart what he had, but I wanted it to be a brain tumor or something curable, as any type of dementia doesn’t have a cure. My friend’s husband works for a private healthcare group and recommended seeing a neurologist. When we saw the neurologist, he said my husband likely had early onset Alzheimer’s. He didn’t charge us for the consultation because he felt really bad for us. I will never forget that day. It broke my heart.

As a regional manager for seven care homes, I knew the disease and that there was no cure. Knowing that made it more difficult to accept that someone I love was diagnosed with dementia. I work with families and have started support groups for carers, but now, dementia affects me personally. Because I knew what to expect, it took me a week to accept my husband’s diagnosis, and I often cried in the shower. My husband has frontotemporal dementia and I’m not sure if he’s in denial, but he doesn’t think anything is wrong with him and thinks he can still function the way he used to. I’ve changed a lot, though. I now understand what it means “to love someone in sickness and in health,” and this vow has taken on a whole new meaning for me. I have developed patience that I never used to have. I was involved in community politics and we’re associate pastors at our church; we went through a period where my activities had to slow down. Before my husband’s diagnosis, I was admittedly a worrier. I have looked into the future, but if I dwell on it too long, it can be upsetting, so I don’t do that too often. Instead, I think about the here and now. My family and I enjoy life as much as we can each day.

When you’re married to someone with dementia, I believe it’s important to make that person feel included by continuing to share new experiences with him. My husband is only 47 years old. We go on double dates with family friends and have family gatherings with them as well. Going on holiday as a family of four has proven to be stressful because I end up doing everything. Now, we go on holiday with friends and family who help share the load. It’s easy, the kids get to play with their friends and I get to have meaningful conversations that include my husband, though his conversations are limited because he now has aphasia and has trouble expressing himself. But he feels valued because we involve him in our banter. For my husband’s birthday last year, we went on a couple’s short break to Monte Carlo for four days. This year, we went skiing in Switzerland. Although we were worried he wouldn’t be able to ski, our friends encouraged us to let him do it. He didn’t manage to get very far and stood in the same place for two hours, but he loved it. These experiences help me continue to bond with my husband and I think they’re needed for both the carer and the person with dementia. I think it’s important to still take calculated risks with him and not mother him too much. He knows when I do and loathes it.

I also encourage my kids, who are 9 and 13 years old, to do other activities with him. We do word searches together, puzzles and play Jenga. My son often gets my husband to play basketball with him. Recently, we went to the movies as a family, which is something we do frequently. We watched the new Jumanji film and my husband laughed throughout the entire film. I think laughter produces good chemicals and is good for the soul. Although my husband’s concentration may not last very long while doing certain activities, at least the feeling of inclusion is still there.

Bambi and I also exercise daily so that we can spend quality time together. I get up early for some “me time” to journal, meditate and pray. Then around 6 a.m., he comes down naturally and finds me exercising. We typically use YouTube videos to exercise. He may not have much coordination anymore, but I know that exercise keeps you fit and it’s something we can do together. He’s very proud when people say to him, “Oh, you still exercise?” He says, “Yeah. I do it with Michelle. We exercise every day.” My husband had always been organized, a quality he was also proud of. I try to help him maintain this trait. He’s very domestic. He tidies the bed and empties the bin. He used to love buying jeans and would add all of them to his cupboard. Now, he wears the same tops all the time. I put away a lot of his clothes so that he doesn’t feel messy with his cupboard.

When you’re married to someone with dementia, I think it’s also important to stay positive. Working in a care setting, I don’t tend to share my experiences with the families that we care for at work because I’m the one who’s supposed to listen to their problems, not the other way around. I like going into the care homes and talking to everyone to see if they’re happy with the care. During these times, people tell me how their loved ones are doing. Some of them are at end-of-life care, so I need to be empathetic to their needs.

By staying positive at work and at home, I’ve found that I’ve been able to maintain a happy, healthy environment for my family; my kids are performing really well in school and enjoy spending time with their dad.

I don’t know if I’m doing it right, but all I can say is that I can live with the abilities that he has now. Hopefully, everything we are doing, including taking extra supplements, trying to eat healthy, exercising, spending time with loved ones, keeping our faith and doing puzzles, are all slowing down the progress of his dementia in some shape or form. Other than that, I still believe in miracles and that is important to me and my family.