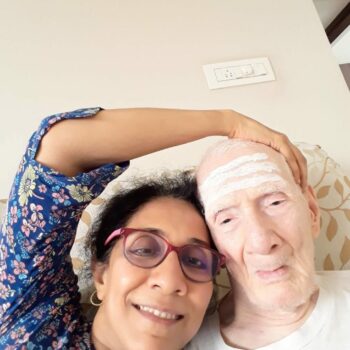 I moved because I knew there would come a time when I wouldn’t be able to go through this experience alone and would need to hire someone to help us. I could not afford that type of care in the United States and I had to travel while my dad still could be counted on to remain calm in a public place, including a plane. For us, moving was the best option.

Geeta Iyer lived in Michigan for 31 years before relocating her entire family back to India in order to be a better caregiver to her father.

My father never learned what type of dementia he is living with. Doctors initially diagnosed him with mild to medium cognitive impairment. My sister is a doctor who eventually concluded he likely has Alzheimer’s, but this diagnosis was not based on an MRI or other diagnostic tests. For a long time, dementia was never even on our radar. When my father started to have short-term memory issues, we assumed it was just a sign of his age.

I lived in Michigan for 31 years, and my parents lived with me for four of those. When we first noticed signs of dementia, it was 2016. He had hearing and vision impairments and sometimes we found him losing his way around the house, unable to find the bathroom or another location he visited every day. Then, in 2017, he woke up in the middle of the night to find an unfamiliar woman next to him. He shook my mother awake, asking who she was, then questioned her about himself and their life together until he was satisfied that they had in fact been married for many years.

My elder sister lived in Columbus, Ohio. We visited her often, but suddenly my father started forgetting that she lived there, or that we had plans to visit her. On the plane, he would become disoriented, demanding to know where he was going. The social worker at the doctor’s office gave me books and pamphlets about dementia. I was always too tired to read them. The stress of caring for my parents alone left me with little energy at the end of each day. After some memory tests, a neurologist eventually diagnosed him with dementia.

At this point, I began contemplating my options. I considered moving to be closer to my sister, hiring help in Michigan where I was located, or moving back to India. In India, hiring help would be more affordable, but it would mean uprooting my life, selling my home and the not insignificant feat of relocating my father when he became confused with even the slightest change to his routine.

In October of 2017, I walked into my office and quit. I didn’t have any plans to quit that morning when I woke up. But it all became too much for me, and in that moment, the decision was made. I would go back to India with my parents as my father’s caretaker.

Selling a home with a person who has dementia living inside it is its own challenge. We couldn’t host viewings, as my father became agitated when strangers came to visit us. Nor could we make any changes to the house while he was there. This March, I finally sold the house, after I had already been living in India for a year. Not earning an income while owning a house that cost money each month added additional stress to my life. I went ahead of my parents to India, where I set up an apartment so that it would be ready before he arrived, but delays in the apartment’s renovations pushed the schedule back even further.

It was April of 2018 before I finally moved myself and my parents back to India, and I learned a lot throughout that experience. If you are someone who is considering a long-distance move to care for a parent with dementia, don’t do it if you don’t have to. Long-distance moves are difficult for most people, especially the elderly. Dementia makes a move even more challenging. But I moved because I knew there would come a time when I wouldn’t be able to go through this experience alone and would need to hire someone to help us. I could not afford that type of care in the United States and I had to travel while my dad still could be counted on to remain calm in a public place, including a plane. For us, moving was the best option.

If you must make that move, preparation is key. Understand the financial impact of the decision, avoid visible changes for as long as possible and take care to postpone agitating your loved one for as long as you can. You know your loved one best and everyone is different, so avoid the stressors as much as you can. When the day comes to make the big move, give your loved one something that you know calms them. A game, melatonin, a favorite book, anything you know will keep them happy and ground them while you are taking your flight, or drive, will be incredibly beneficial to you and to them.

Since moving, my dad’s dementia has progressed. He had been fairly independent in terms of bathing, eating and using the bathroom, though he couldn’t be left alone. After we moved, he always needs help finding the bathroom. Someone has to bathe him and while he can still eat by himself at times, he often has to be fed by someone. His symptoms have become more severe and we have started giving him melatonin at night. He no longer recognizes me or my mom.

When we moved to India, my father thought he was still in the United States. He doesn’t know where he is most of the time, but I think he has adjusted. He lives moment-to-moment with our help.

I haven’t worked again since I quit my job in October, 2017. India is familiar to me, but this new chapter in my life took months of adjustment. I was depressed initially, until I learned to let go and hire 24-hour help at home. Before that, my life revolved around my dad and I didn’t sleep well. My life has changed tremendously now with the help I have. I can work and even get away for a few days. However, I stay home most of the time and haven’t felt excited about doing anything. I think that I should start working again or visit the United States this year for a month.

For our family, the move was worth it, as I have neighbors, friends and relatives who support us. Most importantly, I have been able to hire affordable and reliable caregivers for around-the-clock help in India. My mother is 90 years old and I think she is happier in India, as she is less dependent on me for social interaction. For elders who move from India to the United States, it can be very isolating not having close friends or relatives nearby. I still feel like my life is at a pause, but I can do something about that. We try to keep my dad as comfortable as possible and he has his good and bad moments. He would, no matter where he lives at this point.

Caregivers, remember to be kind to yourself. Find a support group as early as you can. I found a support group late in the process, and they were lovely, kind and helpful. If I could go back, I would have sought that kind of support much earlier. Have a self-care routine, whether it is going out with friends or taking a spa day on a regular basis, you have to make sure you have enough energy left over to live your own life. This is a lesson I am still learning, and one I think a lot of caretakers struggle with. You’re always thinking of your loved one, wondering if they are okay and planning the days ahead around their needs. We have to actively remind ourselves to stop and focus on ourselves sometimes, but try to do that. It helps. You can’t pour from an empty cup.