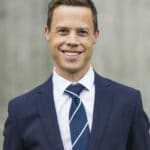 Peter van Wijngaarden, MBBS, PhD, FRANZCO is a Principal Investigator at the Centre for Eye Research Australia (CERA) and an Associate Professor of Ophthalmology at the University of Melbourne Department of Surgery. He is a Deputy Director of CERA and an ophthalmologist in the medical retina clinic at the Royal Victorian Eye and Ear Hospital. Peter completed his PhD in the field of retinal vascular biology at Flinders University and his post-doctoral fellowship in regeneration of the central nervous system in multiple sclerosis, at the University of Cambridge, UK. Peter’s research is focused on novel imaging technologies to detect early markers of eye and central nervous system diseases, with a focus on Alzheimer’s disease. He is grateful for the support of the Yulgilbar Alzheimer’s Research Program, the Pratt Foundation, the H&amp; L Hecht Trust, the Alzheimer’s Drug Discovery Foundation, the Sylvia and Charles Viertel Charitable Foundation, the Lord Mayor’s Charitable Foundation Eldon &amp; Anne Foote Grant and the National Foundation for Medical Research and Innovation.