Being Patient Senior Reporter Phil Gutis spent the day with our patient advisor, Jeff Borghoff, who was the first recipient in Biogen’s latest trial of the Alzheimer’s drug aducanumab. Both Phil and Jeff have been diagnosed with early onset Alzheimer’s.

TOMS RIVER, NJ — Jeff Borghoff today took yet another small step toward finding a cure for Alzheimer’s disease as he became the first person in the world to begin the new trial of Biogen’s aducanumab.

Borghoff participated in the original phase 3 trial of aducanumab for 36 months before Biogen shocked the world by cancelling the research study after a futility analysis found that aducanumab was not making a significant impact on cognition and memory.

The story of aducanumab, however, was not quite over.

In October 2019, Biogen and its partner Eisai reversed themselves and announced that further analysis found that aducanumab was in fact working. In October, the companies said they would seek approval from the Food & Drug Administration (FDA) for aducanumab and, while awaiting the government’s decision, allow former trial participants to once again receive the drug.

“I really thought aducanumab was making a difference,” Borghoff said. “My wife and I were devastated when the trial ended and we’re so delighted to once again be part of finding a treatment for Alzheimer’s.”

'How Does It Feel to Be Number One?' First Patient Receives Biogen's Alzheimer's Drug in New Trial

Borghoff received approximately 115 milligrams of aducanumab this morning after about an hour delay while Biogen and the staff at Advanced Memory Research Institute here in Toms River scrambled to get a report from an MRI that Borghoff received last week. The reading had been promised by 5 p.m. last night, but it didn’t come in.

“I feel like we’re at Cape Canaveral waiting for a final system check,” Borghoff said as he sat waiting in the lobby for almost two hours. “I can almost hear the t-minus countdown in the background.”

The actual re-dosing of the drug itself was fairly anti-climatic. A technician slid an IV line into Borghoff’s left arm, and connected it to an IV bag with aducanumab. The drug, mixed with saline, slowly began to drip into Borghoff’s arm.

In preparation for the re-dosing, Borghoff had received new cognitive testing, the above-mentioned MRI and a PET scan to determine the level of plaque in his brain. He had also received a lumbar puncture, commonly known as a spinal tap. All of the testing is designed to give Biogen yet another baseline so scientists can continue judging aducanumab’s efficacy.

Biogen welcomed Borghoff’s infusion. Moments after the needle slid into his arm, Biogen spokesman David Caouette sent an email to Being Patient thanking Borghoff and “all clinical trial participants who have contributed to the development of aducanumab.”

“The first patient has now been dosed in the aducanumab re-dosing study, EMBARK, in line with our commitment to offer aducanumab to eligible patients who were previously in aducanumab trials,” Caouette said.

“Alzheimer’s disease remains one of the greatest public health challenges of our time, with the burden on patients and their families increasing each day,” he added. “Together, we aim to change the course of this devastating disease, which currently cannot be stopped, delayed or prevented.”

Aducanumab was discovered by a team of scientists from Neurimmune and researchers at the University of Zurich. In 2007, Neurimmune licensed worldwide exclusive rights to Biogen. Phase 1 safety trials of aducanumab began in 2012. In 2015, the companies reported that one year of monthly intravenous infusions of aducanumab reduces beta-amyloid plaque in patients with mild Alzheimer’s disease. 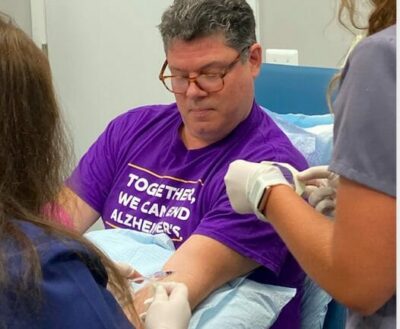 After about an hour, the IV bag was dry and the technicians returned to remove the IV line and tape up Borghoff’s arm.

Asked how it felt to receive the drug again, Borghoff said he was really excited. “I can’t believe that it’s been a year,” he said. “It has been quite a rollercoaster for sure.”

Borghoff said that despite the negative news last March, he had never really given up hope about aducanumab.

“I never gave up on the researchers and the people who are driven to find a cure,” Borghoff added.

Advanced Memory Research has been involved in the testing of aducanumab since 2012 when it enrolled 17 participants — of a total of about 197 people worldwide — in the phase 1b trial of the drug.

Of the 4,000 people worldwide in the Biogen trials when it was cancelled in March 2019, Advanced Memory Research had about 53 people enrolled.

Anna Brocco, Director of Operations and Clinical Research at Advanced Memory, said that 34 people have already agreed to come back for the new trial.

Asked why it was so important that Advanced Memory Research was the first site in the world to start the re-dosing trial, Brocco described herself as a “momma bear” when it comes to looking after the patients enrolled in clinical trials.

“We’ve been on this journey together for so long,” she said. “I was watching them maintain their test scores and quality of life. So I didn’t want any delay in getting them back onto something that helped them.”

“I really felt that the drug works,” Brocco added.

After the October reversal, Biogen presented its preliminary data to an Alzheimer’s conference in San Diego. The bottom line was that patients with mild cognitive impairment (MCI) or early Alzheimer’s who were on a larger dose of aducanumab for a longer amount of time showed a statistically significant slowing of the disease.

In the phase 3 trials, some patients received up to 10 milligrams per kilogram of body weight. It was those patients, researchers said, who showed the most improvement.

The amount of drug will increase to three milligrams per kilogram for the third and fourth infusions, and then six milligrams for the fifth and sixth infusions. After that, monthly infusions will be at the 10 milligram level.

Phil Gutis is a former New York Times reporter and current Being Patient contributor who was diagnosed with early onset Alzheimer’s. This article is part of his Phil’s Journal series, chronicling his experience living with Alzheimer’s. 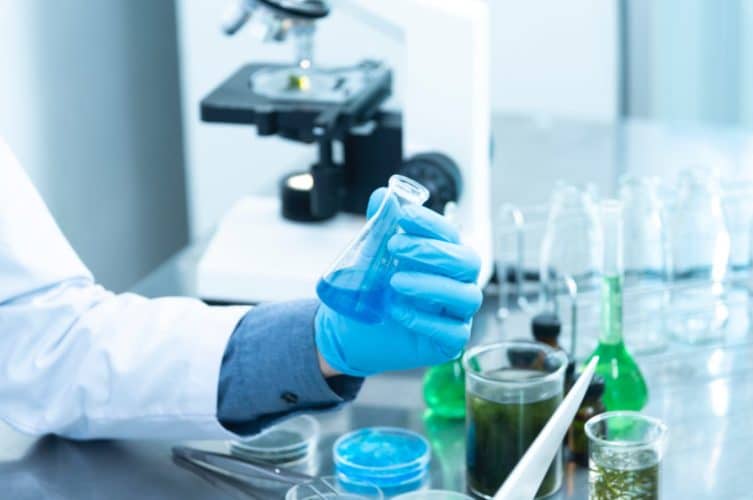 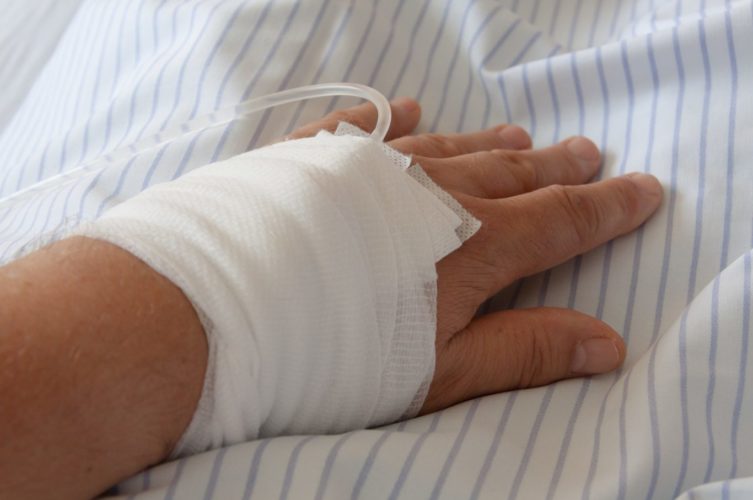 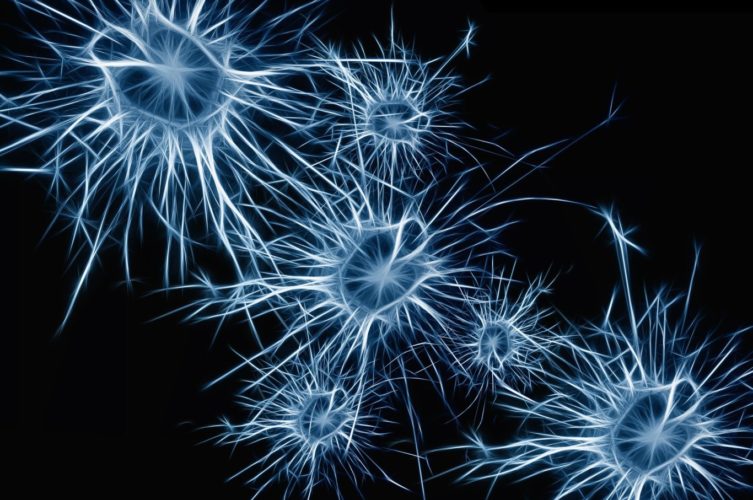 16 thoughts on “Phil’s Journal: My Good Friend Is the First to Receive Biogen’s Alzheimer’s Drug in New Trial”