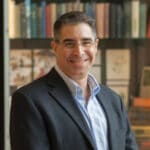 Dr. Snyder is the Vice President for Research & Economic Development at the University of Rhode Island, where he is also an active professor and scientist within the university’s Ryan Institute for Neuroscience. Dr. Snyder also serves as a Scholar-in-Residence at the Rhode Island School of Design. Dr. Snyder received his doctorate in clinical neuropsychology and behavioral neuroscience from Michigan State University. Dr. Snyder is also a Fellow of the American Psychological Association (Div. 40, Clinical Neuropsychology; Div. 6, Behavioural Neuroscience), and the recipient of the 2001 Distinguished Early Career Contributions Award from the National Academy of Neuropsychology.